Boxer is hosting a Movie Clip Wednesday Meme where everyone picks a clip from their favorite movies based on a weekly theme. This week's theme is BEST ANIMAL CHARACTER. I don't know why but I immediately thought of - Arnold Ziffel from Green Acres. It may have been because I just recently saw Pulp Fiction and this scene.

Anyway, I couldn't find any decent clips of Arnold, so I went with my Number 2 pick - Bruce from Jaws. Yes, he had a name that Spielberg and the crew gave him. And even though by today's standards this mechanical nightmare of a prop (ask Spielberg) isn't much to look at, it scared the crap out of me when I first saw it at 15. This animal is only on screen for like 3 minutes but look at the impact it's had on culture and the movie industry. Anyway, this clip isn't original but is a good compilation of the shark scenes.

If you want to see more Animal Characters, and God only knows what we'll get this week, then head on over to Boxer's.
Posted by Buzz Kill at 12:00 AM 18 comments:

Boxer is hosting a Movie Clip Wednesday Meme where everyone picks a clip from their favorite movies based on a weekly theme. This week's theme is BEST KISS. My initial thoughts on this were that this is a chick movie topic. Romance, hero saving the day, Casablanca type kissy face crap. Then I thought, no, I need to look at this from a guy's perspective. Once I had that idea in my head, the research for this theme became - fun.

After wiling away a couple of hours on Google and Youtube, I came up with the movie and the scene. I remember this was a little controversial when it came out in 1999. The movie itself was pretty forgettable and was really a direct ripoff of Dangerous Liaisons. Figure it out? I'm talking about Cruel Intentions and the infamous kissing scene between Sarah Michelle Gellar and Selma Blair. I had to watch this scene about 10 times before making my decision. Enjoy.

If you want to see more kissing scenes (and hopefully some more girl on girl action), than head on over to Boxer's.
Posted by Buzz Kill at 12:00 AM 9 comments: 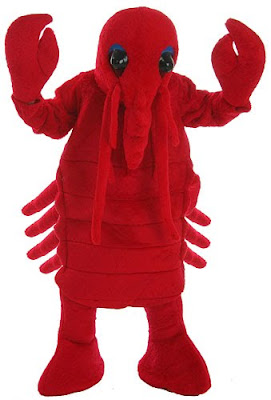 
Donna and Heff over at Heff's Bar and Grill and current reigning throwdown champions are hosting this month's Throwdown with the theme ingredient of LOBSTER. Let me start by saying that I love lobster. It's a rare treat for the Mrs and me and has never been prepared in the Kill house. It's always a special dinner at a restaurant sans kids. And I'm going to keep it that way. The only way I can do throwdowns is if they are a family meal. I don't have the time (although I wish I did) to make special meals for the purposes of a cooking contest.

That being said, I took the Mock Lobster route. The kids could care less and it gives me a chance to try a new recipe that might become a regular staple in the Kill Family recipe arsenal. And I'm way late with it, so I'm just doing it - because.

A lot of faux lobster recipes use monk fish (what?) for taste and texture. This Mock Lobster Recipe is chicken based and barbecued. A lot of reviewers swear it tastes like lobster. I'm sceptical.

So here's what I started with: 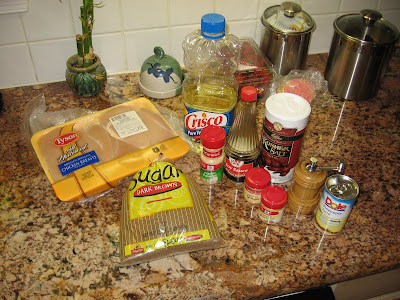 Here it is cooking on the grill (with some onions and tomatoes): 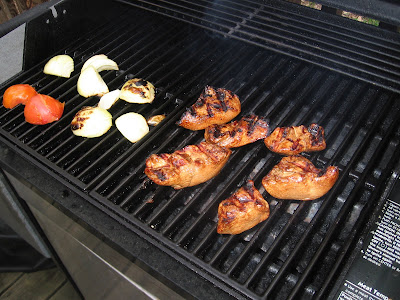 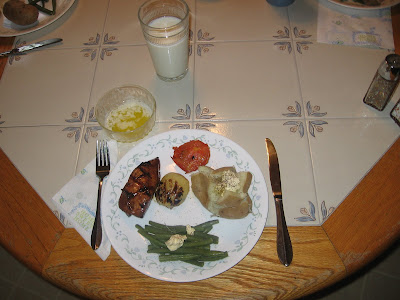 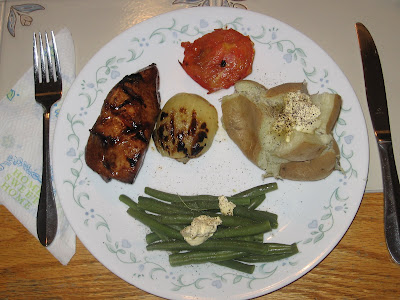 The verdict: The kids liked it but really had nothing to compare it to. The Mrs is out of town, so no criticism there. So what did I think? The first couple of bites tasted like barbecued chicken with a little of the soy and ginger flavor in the background. And it has the texture of - chicken. Then I tried dipping in melted butter. Maybe it was wishful thinking or chemical induced hypnosis, but it kind of tasted like - lobster. The butter (and I used real, unsalted butter) really made it taste a little like lobster. Now if I blind taste tested it, I could easily tell the difference, but it's interesting how you get the lobster taste with just the addition of butter. I'm looking forward to leftovers to see how that does. So there you have it, Mock Lobster in a hurry and economical so you can feed the masses.

Check out the other entries over at the HBAG.
Posted by Buzz Kill at 10:00 AM 9 comments:

Boxer is hosting a Movie Clip Wednesday Meme where everyone picks a clip from their favorite movies based on a weekly theme. This week's theme is BEST MOVIE TO WATCH ON A RAINY DAY. I don't think I have ever (consciously) picked a movie to watch specifically because it was raining and I really didn't know what the criteria for picking a rainy day movie was, so I did some research. I found that most people like to pick movies that are long and upbeat or cheery to chase away the rainy day blues.

Now I can see wanting to have a long movie because most rainstorms are going to last for several hours. So I'm down with this. The upbeat/cheery part may be good for most people but not me. I'm generally not upbeat/cheery on a bright sunny day because, let's face it, I have a wife and kids.

So I dusted off the old thinking cap and tried to recall movies I watched while it was raining. I found that I typically watch war movies. I think it's because most wars happen outside and a lot of times, it's raining. Especially Vietnam type movies. Now there are a lot of good Vietnam War movies out there. I guess because it was such a turbulent time in American History that left a lot of scars, most film makers do the subject justice. I can't really think of a bad Vietnam movie (maybe the Rambo movies, but they weren't horrible). It's of particular interest to me because I missed being drafted by less than 3 years. I always think of that when I watch these movies.

So three that came to mind immediately were Platoon, Apocalypse Now and Predator. Yeah, I know Predator was after Vietnam, but it took place in the same region and it's got Arnold and Jesse Ventura in it. I couldn't find any decent clips that weren't modified or 10 minutes long. Then it came to me. My favorite Vietnam movie and one that I would watch over and over again on a rainy day - Full Metal Jacket. Kubrick's best movie, it's really two movies in one - boot camp and Vietnam. This is my favorite scene from the Vietnam side of the movie.

And, of course, this scene:

If you want to see more Rainy Day Movies, than cheer up and head on over to Boxer's.
Posted by Buzz Kill at 12:00 AM 10 comments:

Every Easter it's a tradition in the Kill Family to have our friends (who live down the street) over for Easter Breakfast and an Easter Egg Hunt. They're Jewish but like the Christian holidays. The kids are bigger now but they all still do the hunt and eat all the food I make. I made blueberry pancakes, eggs, bacon and SCRAPPLE! It was an Easter miracle. 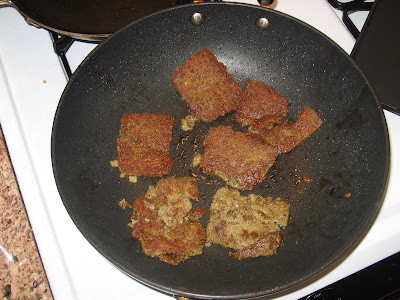 For the uninitiated (Heff - I'm looking in your direction), scrapple is traditionally a mush of pork scraps and trimmings combined with cornmeal and flour, and spices. The mush is formed into a semi-solid congealed loaf, and slices of the scrapple are then panfried before serving ( i like ketchup on mine). Scraps of meat left over from butchering, not used or sold elsewhere, were made into scrapple to avoid waste. Scrapple is best known as a regional Amish food of the Mid-Atlantic States (Delaware, Pennsylvania, New Jersey, and Maryland).

"Semi-solid congealed loaf". Now do you get it?
Posted by Buzz Kill at 8:38 PM 9 comments:

Boxer is hosting a Movie Clip Wednesday Meme where everyone picks a clip from their favorite movies based on a weekly theme. This week's theme is BEST USE OF ALCOHOL. I could have used my clip from last week of the Raiders of the Lost Ark bar scene (best use of whiskey) but thought that would be too lame (I was right wasn't I?) and I didn't want to go to the same well twice (get it, well, well drinks, alcohol - oooohhhh boy.).

I had a lot of other great scenes in mind too, unfortunately, I couldn't find videos. My first thought was a scene from one of Bill Murray's first movies - Where the Buffalo Roam (about the life of Hunter S. Thompson). This is a great movie if you've never seen it with numerous funny drug and alcohol scenes. Couldn't find anything.

Then I thought about Leaving Las Vegas which is all about alcohol. I wanted the Elizabeth Shue scene by the pool with the bottle of tequila (all the guys know what I'm talking about). Couldn't find anything.

Then, THEN I thought of Revenge of the Nerds. The original had the Greek Olympics with the belching contest and the Takahashi bike race. This was a franchise movie, surely there would be clips. I couldn't find anything that wasn't bastardized by someone.

I was about to quit when I thought of the movie that I have written about on numerous occasions and it's about alcohol - Bad Santa (the Billy Bob Thorton gem with the distinction of having the most F-words in a Christmas movie). Bingo, here it is (and probably 1/2 of the F-words in this movie are in this scene and I truly believe Thorton was really drunk):

A quick honorable mention goes to Dudley Moore in Arthur. I know I'll blogger jinx this but I laugh my ass off at this movie every time I see it (despite Liza Minnelli being in it) and Moore plays a really funny drunk back in the days when drunk driving was acceptable - ahh memories. This is my favorite line in the movie:

If you want to see more alcohol induced scenes of movie hilarity, than take a shot and head on over to Boxer's.
Posted by Buzz Kill at 7:45 PM 14 comments: