The Deck and Walk

The other day, Dani over at Gardening Under the Florida Sun was contemplating putting in brick pavers around her garden. I did something similar around my house about 12 years ago. I used one of those cement molds and laid out a faux-cobblestone walk around one side of my house. It took 64 bags of cement, about 12 bottles of cement dye and an entire summer, but I got it done. One mistake I made was to not put down packing stone first (I laid it right on the compacted dirt). Some of the stones are starting to shift a little.

After I was done, I contemplated what to put in the cracks. I was toying with the idea of using sand or topsoil. Well, I procrastinated so long (as I often do) that the problem took care of itself. After 3 or 4 seasons, the cracks filled with dirt and mulch. Because I have a lot of trees, the shade was conducive for moss growth. Viola, problem solved. After a few more seasons (and especially the last 2 wet ones) the moss filled in with a vengeance and actually looks kind of cool. 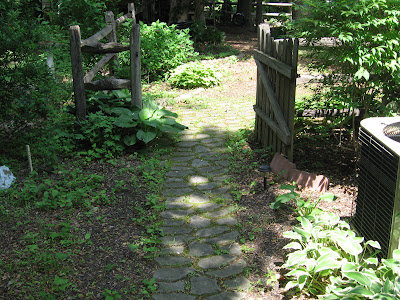 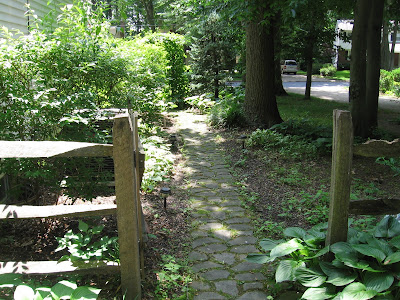 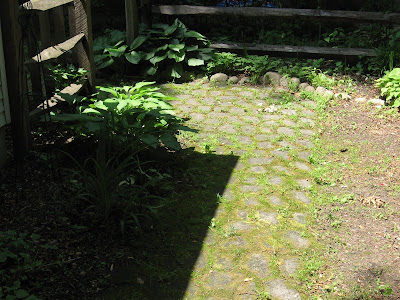 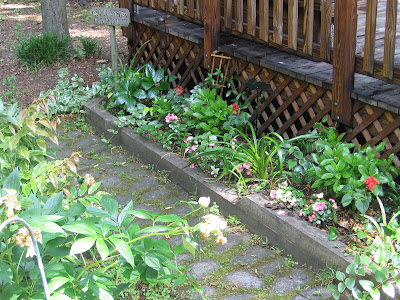 We've had a couple of late winter snows where the snow laid out he moss for a couple of weeks. When it melted, the moss was almost a neon green color. Wish I had a picture of that.

Last week I took all of the furniture, plants and crap off of the deck to clean it. Because of the trees, it gets really dirty, so I chemical clean and power wash it every year. It's a lot of work but the deck has held up for 16 seasons. The chemical cleaner leaves a bleached look to the wood. I sealed it with Thompson's Water Seal and it darkened it up nicely. So I'm good for another year. 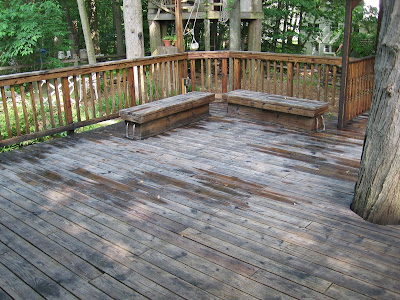 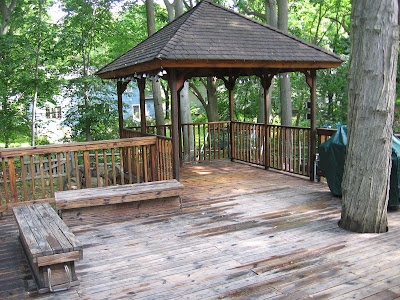 The weather was so nice on Saturday that the Pudge and his buddy were enjoying there lunch up in the Pirate Ship. I don't keep it up as well as the deck and it needs some maintenance - mostly in the rigging. They did fix the cannon by themselves (it fires tennis balls about 25 feet). 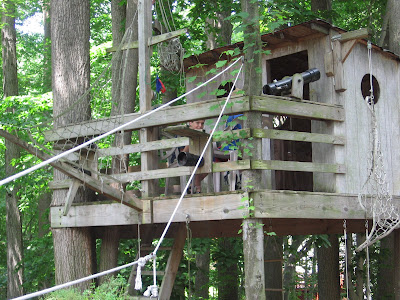 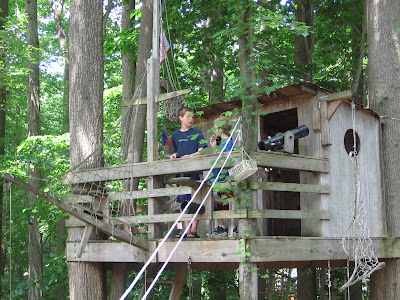 Labels: Welcome to my Nightmare 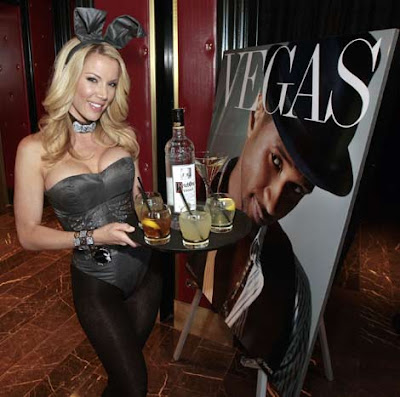 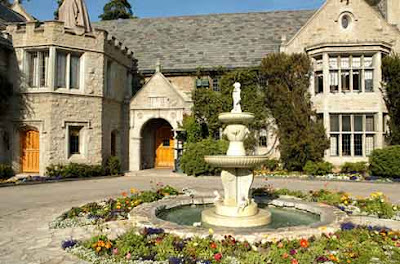 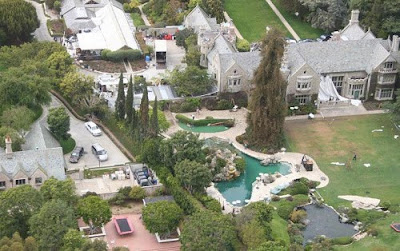 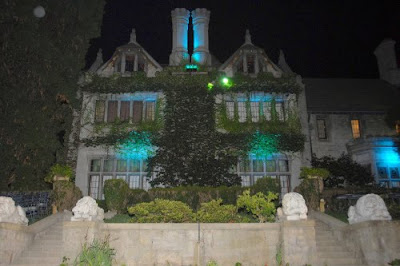 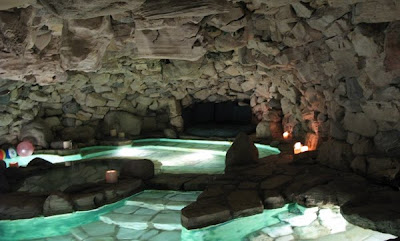 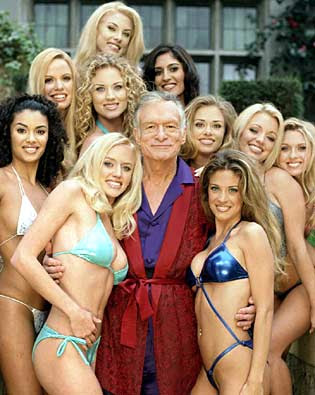 Boxer is hosting a Movie Clip Wednesday Meme where everyone picks a clip from their favorite movies based on a weekly theme. This week's theme is BEST DOCUMENTARY. I started looking at top 10 lists for documentaries and realized - I don't watch many documentaries. Unless you consider shows on HBO such as Taxi Cab Confessions, Real Sex, Cathouse and Pornacopia to be legitimate documentaries - then I watch a lot of documentaries. And apparently, when a lot of people on the Internet think of documentaries, they think of Michael Moore. Don't get me started on this liberal propaganda claptrap machine. And I'll never forgive him for what he did to Charlton Heston in Bowling for Columbine. But I digress.

So after giving it some thought, I decided to go the rockumentary route and I chose 1970's Woodstock. This film has some of the greatest rock performances of all time, plus naked hippie chicks on acid. It also was one of the 1st movies to feature the two and three panel screen presentation, edited by a very young Martin Scorsese. One of my favorite scenes is the interview with the guy cleaning out the port-o-lets. I couldn't find that but found the next best scene - give me and F.

I also have a bonus clip that I came across a few years ago. Someone took the Joe Cocker classic A Little Help From My Friends and actually tries to interpret what Joe is trying to say - hysterical.

If you want to see more really good documentary movies, then head on over to Boxer's.
Posted by Buzz Kill at 9:00 PM 10 comments:

Boxer is hosting a Movie Clip Wednesday Meme where everyone picks a clip from their favorite movies based on a weekly theme. This week's theme is BEST SCIENCE FICTION. I didn't have to think on this one too much. I remember seeing a very cryptic trailer for this movie in the theater in late 1976 (it might have been when I saw Jaws) and thinking - what the hell? The suspense that this movie generated even before I saw it was memorable - because I am remembering it today. That movie was 1977's Close Encounters of the Third Kind.

This was at a time when UFOs, alien abductions and Area 51 were in vogue. This was a sci-fi movie the likes of which I had never seen. Most movies to this point never really showed the aliens and their space craft up close. They were always some nebulous thing that you would just get glimpses of. This movie started out that way but really delivers at the end. Richard Dreyfuss as Roy Neary, the every-man utility worker was really good in this. And his wife, Teri Garr was still pretty hot. I couldn't find my favorite scene where he and Jillian (played by Melinda Dillon) escape from the military and take off their gas masks. I remember holding my breath when they did that. Here's the movie trailer:

If you want to see more really good sci-fi movies, then head on over to Boxer's.
Posted by Buzz Kill at 12:00 AM 23 comments:

The passing of a heavy metal god occurred yesterday. Ronnie James Dio performed with Elf, Rainbow, Black Sabbath, Heaven & Hell, and his own band Dio. One of the most influential metal vocals in history with such hits as Holy Diver, Man on the Silver Mountain and Rainbow in the Dark. He also popularized the "devil's horns" seen at all concerts. Who'd have thought that Ozzy would outlive him? Bang your heads. 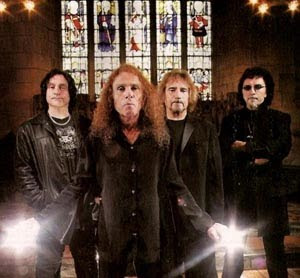 Movie Clip Wednesday - BEST ADAPTATION OF A BOOK TO FILM

Boxer is hosting a Movie Clip Wednesday Meme where everyone picks a clip from their favorite movies based on a weekly theme. This week's theme is BEST ADAPTATION OF A BOOK TO FILM. I don't get to read many books these days so I have very little experience to draw from for this theme. The last couple of books that I read that were made into movies were The Hunt for Red October and Howard Stern's Private Parts. I enjoyed both movies but I didn't feel they were true to the original novels. I've read a lot of Steven King but don't really like any of the film adaptations. Shawshank redemption is my favorite Steven King movie, but I never read the book.

So I decided to go way, way back to my school days for some inspiration. I stopped around 7th or 8th grade at the Dicken's classic - A Christmas Carol. I loved this book and there are probably 20 or 30 adaptations of this novel to the big screen. But my favorite is the 1951 movie Scrooge starring Alastair Sim as Ebenezer Scrooge. I try to watch this every Christmas Eve (although I missed it this year). There's childhood Christmas magic going on in this movie that I really like.

The Macy's in center city Philadelphia has a Dicken's Village that is very true to the book and (I believe) this movie. We've taken the kids there several times over the years and they always enjoyed it. In fact, the last time we went we took two of their Jewish friends who were amazed by the village. I found out later from their parents that, being Jewish, they had never read the book or seen the movies. That was interesting.

Anyway, I love the scene where Ebenezer has the passing boy go buy the Christmas goose (couldn't find the clip) and the following scene:

If you want to see more really good book to film adaptations, then head on over to Boxer's.
Posted by Buzz Kill at 12:00 AM 12 comments:

Boxer is hosting a Movie Clip Wednesday Meme where everyone picks a clip from their favorite movies based on a weekly theme. This week's theme is WORST CASTING. There is a fine line between a bad performance and a miscast role. They don't necessarily go hand-in-hand. For example, I think Michael Keaton was miscast as Batman but did a good job with the role (people will disagree with that conclusion).

What I'm looking for is a well-known actor (or actress) that is famously good but is just completely out of their element. One of those, "What were they thinking roles?" And again, this is a fine line because a lot of actors/actresses will take roles that stretch their acting abilities. I'll use the Batman franchise again as an example. Never in a million years would I have cast Heath Ledger as the Joker but he was absolutely incredible in the role (the role of a lifetime as it turns out).

An example of a bad performance is a properly cast role would be Keanu Reeves in The Devil's Advocate. There's probably a dozen actors that could have played Kevin Lomax better than the stiff-as-a-board-botched-southern-accent way the Reeves played it (Brad Pitt or Alec Baldwin come to mind). I watch this movie because Charlize Theron and Connie Nielsen get naked in it.

So after much research, I came up with the worst miscasting of everything that I viewed on YouTube. And I hate to do this to the Duke, but John Wayne in Howard Hugh's The Conqueror is just plain awful. He plays Genghis Khan the Mongrel and there's just no way on his best day he could pull off this role. I actually saw this movie many years ago and still remember how weird this movie seemed to me. This is an interesting dance scene that has a little bit of Wayne in it. Enough to get the cringe-worthy performance I'm talking about.


And to be fair to the guys, I selected the worst miscast female role. Rosie O'Donnell in Exit to Eden featuring Rosie in a corset - 'nuff said.


If you want to see more really miscast roles, then head on over to Boxer's.
Posted by Buzz Kill at 10:30 PM 13 comments: