That Movie Clip Wednesday Advent Wreath builder, Boxer is still too busy making tent chandeliers (yeah - I know - where does she get the energy?) to care for the wayward child that she gave birth to. So the lovely Joanna Cake again will perform the hostess duties. This MCW Meme has everyone picking a clip from their favorite movies based on a weekly theme while trying to keep the clip or clips to around 3 minutes long. She has declared this week's theme to be - Movie One-Hit Wonder.

Tough, tough category. I gave this a fair amount of thought as to what constitutes a one-hit wonder. It would have to be a recognizable character (not necessarily the lead) that may have had an impact on the movie industry or culture. And then the actor/actress basically faded into obscurity.

I came up with several actresses who I believe made one good, solid memorable film. And even though they may have continued acting, they never scored big again. They would be Phoebe Cates in Fast Times at Ridgemont High and Mia Sara in Ferris Bueller's Day Off. Both of whom I've previously posted on. Actors such as Chris Makepiece in Meatballs and Ilan Mitchell-Smith from Weird Science also come to mind. And an argument can be made that James Dean was a one-hit wonder with East of Eden, but I truly believe he would have had many more successes had he not died. Same deal with Heath Ledger.

No, I'm going with a semi-obscure Steven King based movie - 1983's Christine starring Keith Gordon. He played the nerdy mechanic wannabe Arnie Cunningham who fixes up an old (possessed) 1958 Plymouth Fury in order to get the girl. Kieth Gordon did go on to have a semi-memorable part in Back to School but was pretty much upstaged by Rodney Dangerfield. He has since gone on to direct some 15 films and TV series including Showtime's Dexter, but he never acted in a memorable film after Christine.

See who everyone else thinks is a one-hit wonder over at Joanna's. There won't be any seconds.
Posted by Buzz Kill at 12:00 AM 14 comments:

That Movie Clip Wednesday domestic traveler, Boxer is still drying out from her sojourn to the southwest. So the lovely Joanna Cake again will perform the hostess duties. This MCW Meme has everyone picking a clip from their favorite movies based on a weekly theme while trying to keep the clip or clips to around 3 minutes long. She has declared this week's theme to be - Best Gunfight Scene.

Well, I'm short on time because I just found out the theme on Tuesday night. But there is only one movie gunfight that comes to mind immediately, and that's 1995's Heat. It stars Robert Deniro, Al Pacino, Val Kilmer and Tom Siezmore in one of the most intense, sociopathic street fights that I've ever seen on film. What really makes this fight is the sound, and I have an HD version for your veiwing pleasure. It is a little long, but you won't be able to stop watching once you start. Warning - graphic, unadulterated violence - Oh yeah!

The rest of the movie isn't very memorable, but it's worth watching just for this scene. Head on over to a Joanna's for more carnage.

Well, it's official, The Boy is an Eagle Scout. The troop held a court of honor a couple of weeks ago and we pinned him. 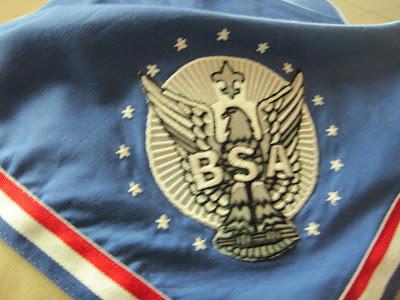 Lame attempt at photoshopping the cake. 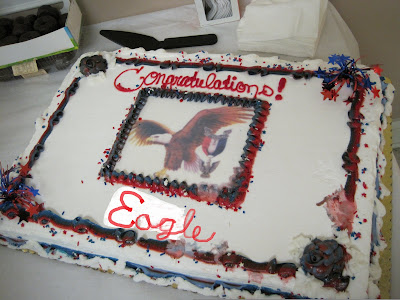 The Boy and The Pudge. 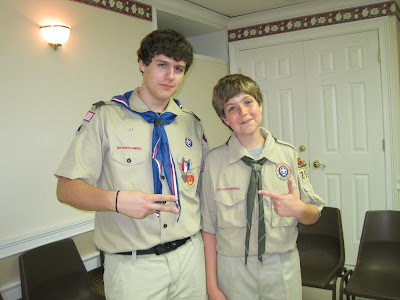 The Boy and The Old Man. 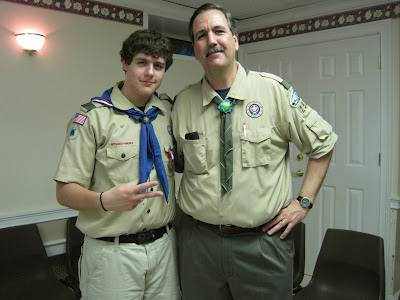 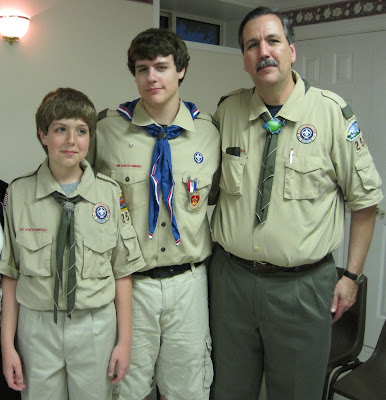 So The Boy had his High School Senior Prom this week. His date, "R" looked great but (in my opinion) is way too good for him. He informed the Mrs and I the day before that 3 other couples and a limo were showing up at our house for pictures. Here are a couple of the pictures. 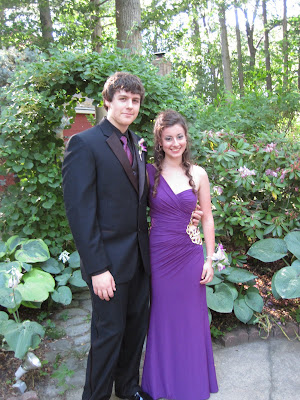 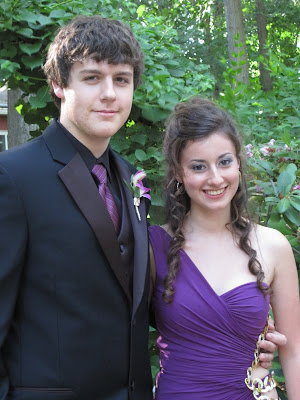 I may have some pictures of the other couples at a later date.

As for the Prom, The Boy and R were going as "friends" although they briefly "dated" about 6 months ago. His main squeeze "L" was going to the Prom with another guy who, according to The Boy, is "gay" (why is everything in quotes?). I'm not exactly sure what transpired (and will maybe provide an after action report later when I do find out) but The Boy and L are through, done...she's not coming around anymore. L was too good for him too (she is going to a reputable university to study medicine). And I'm not sure what R's status is as of this writing. Oh to be a stupid teenager again.

The Boy gets home from the Prom at around 11:30PM and comes into our bedroom to let us know (actually the Mrs because he knows I don't care) that he's home and packing to go to the shore. It's a long time New Jersey tradition to go to the shore after the Prom. I did it 32 years ago.

Here's the kicker. He's taking his buddy "M" with him to the shore (it's about 75 minute ride) and when the Boy comes in to our room to talk to the Mrs, his buddy M comes in the room too! Is it me or am I right to be upset by this? The Mrs shook it off as boys just not knowing any better. There is no way I would have ever done that at his (or any other) age.

In any event, The Boy is down the shore for a couple of days, which means peace and quiet for me and The Pudge.
Posted by Buzz Kill at 1:15 PM 9 comments:

That Movie Clip Wednesday birth mother, Boxer is still an absentee parent. So the lovely and scantily clad Joanna Cake again will perform the hostess duties. This MCW Meme has everyone picking a clip from their favorite movies based on a weekly theme while trying to keep the clip or clips to around 3 minutes long. She has declared this week's theme to be - Best Flood Scene. I think I proposed this one because it was on my mind with the resent events in the low lands of the Mighty Mississippi.

What I had in mind was not your standard Ten Commandments parting of the Red Sea type flooding (although that was pretty cool). Or your typical farm flooding like Mel Gibson's The River. No, I'm talking about the worst possible place to have a flood, and that's at sea. If you're in a ship or a submarine, the ability to float means an awful lot. There are some great sea flooding scenes from The Poseidon Adventure and The Perfect Storm, to Das Boot, Gray Lady Down and Crimson Tide.

I decided to go with a more "instantaneous" nautical flooding scene, and that was the mini-sub implosion scene in 1989's The Abyss. When that glass starts cracking and you know it's just a matter of seconds before Lt. Coffey is done, that's edge-of-your-seat suspense. The rest of the movie gets a little hokey and there is the whole plot twist at the end, but I love this scene.

Everyone should be up to their necks with this theme (groan) so head on over to Joanna's for more interesting water sports.

As a special bonus and at no extra charge to you, the consumer (I thought of this one after I did the write-up), I present to you what I think is one of the funniest flood scenes ever. It's a little long but worth the watch.