The Big Hole in the Side of My House

These pictures were taken 2 weeks ago.  They've knocked 2 large pass-thrus in the outside wall now that the addition is fully enclosed.

The Highland Games - a whole weekend of Groundskeeper Willie imitations, Braveheart yells of "Freedom!", haggis jokes, some Scottish games of skill and - wait for it - catapults!  About every 2 -3 years, our council holds a camporee at one of it's scout reservations to promote the age-old traditions of the Scottish clans - throwing stuff.  This was a weekend camp from Friday night to Sunday morning, with the actual games held all day Saturday.

The day started with a 6:00AM revelry.  We needed to be up and the troop fed by 7:00AM.  We had hot and cold cereal, fruit and granola bars.  We had 3 patrols entered (the Flaming Eagles, the Phoenix and the Raging Ravens - the boys like fire and anger), each with 5 - 6 scouts.  To even out the skill levels and prevent troops from stacking patrols, the events had 2 classification - heavy weight and light weight.  Boys in high school or above the rank of First Class were considered heavy weight.  We're a young troop and we only had one scout in the heavy weight class.  There were about 18 troops, 35 patrols and over 200 scouts participating.  One troop actually showed up in kilts, which was pretty cool.


Get your Haggis right here! Chopped heart and lungs boiled in a wee sheep's stomach! Tastes as good as it sounds! ~ Groundskeeper Willie

The games consist of 15 skill stations that each patrol must negotiate.  Most of the skills required throwing something - rocks, stones, cabers, spears, etc. The remaining stations were feats of strength like the tug-of-war or log drag.  And each troop had to host a station and have it set up, ready to go at 7:30AM. Our station was the Hammer Throw. Our scoutmaster made light and heavy "hammers" out of free weights, 1" pipe and clamps. They worked great and I think we had one of the better stations at the event.

We only had 3 adult leaders on this trip, so the scoutmaster and other leader set up and ran our station while I followed the three patrols and hustled them around to make sure they got to the correct station at the right time. A monumental task made more difficult by a bunch of un-prepared troops. When the games officially started at 8:30AM, about a 1/3 of the stations weren't ready or even identified. It was slow going at first.


After all of the stations were completed and lunch was eaten (the council's Order of the Arrow group at the camp had a hoagie sale - yea, no cooking!), it was time for the much anticipated Catapult Siege.  The troop actually prepared for this 3 Saturdays in advance of the games by constructing our catapult and trailering it to the camp (allowed by rule).  Also, the catapult had to be constructed of timbers (no dimensional lumber) and lashed together with rope (no mechanical fasteners).


“"Bonjoooouuuuurrrrrrr yer cheese eatin' surrender monkeys"” ~ Groundskeeper Willie on the French (or other troops in the competition).

The power for the catapult could come from the boys (boys pulling a rope), springs, bungees or counterweights.  We chose to use counterweights and two garage door springs.  The catapult had to throw a full, 2-liter soda bottle as far as possible.

There were nine catapults in all.  I don't have pictures of them (for the public).  It was an interesting group of engineering marvels.  All different in varying degrees, most not really functional.  After the order was given to commence firing, you could fire as many times as you wanted, tweak the catapult for maximum distance and you would be measured on your longest shot.

The camp provided a dinner of chicken, pulled pork, ham and ziti (guid Scottish fare), so no cooking again.   Unfortunately, we couldn't have a camp fire because of drought and fire restrictions, so we had a camp-wide meeting under the large pavilion for the awards.  Out of a possible 45 ribbons in the lightweight class (15 games, 1st, 2nd and 3rd places), our patrols took home 15 ribbons.  Most by the Flaming Eagles (9, I think), the rest by the Phoenixes (Phoenii? - we always have this discussion) with the Raging Ravens getting skunked.  But the one that really mattered to us, the catapult siege 2nd place ribbon, was truly a troop effort and currently hangs from the troop flag pole.  Not bad for our first time in the Highlands.

Labels: Boy Scouts, Camping, The Pudge, Welcome to my Nightmare

* - A nod to Gilda Radner's Roseanne Roseannadanna.  Anyone remember that sketch?  Well, I sure do.

Way back in January, I told you all about my quest to get the troop to Class "A" status with their uniforms by ensuring that all of the boys had neckerchief slides.  To that end I think I was successful, although, like most eveything I do, it turned into a much larger project than it should have been.

In addition to the troop, we hosted not one, but two Webelos Dens that were ready to "cross-over" to the Boy Scouts and were checking out our troop (boys age out of Webelos at 11 years old and have the option of choosing a boy scout troop in which to transfer or leaving the scouting program).

Labels: Boy Scouts, the Boy, The Pudge, Welcome to my Nightmare 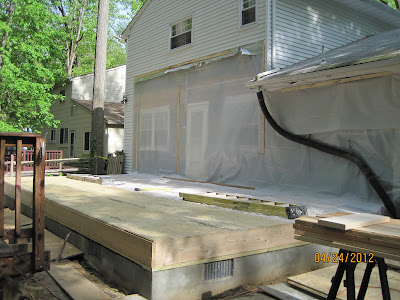 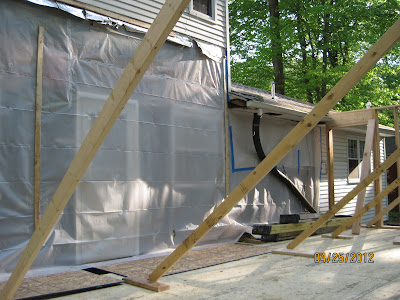 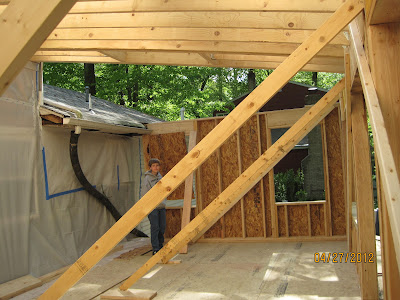