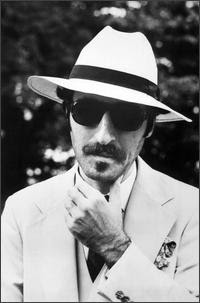 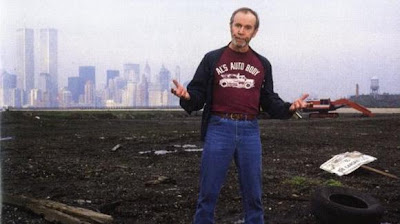 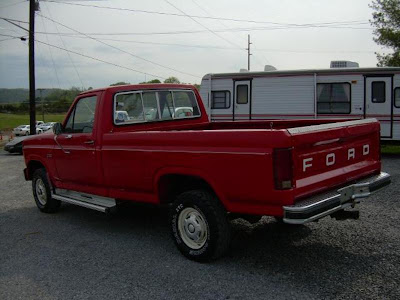 LOL !!!!!
I see your Mrs doesn't read your blog.
Have a fine Monday Buzz

That particular truck, right there? I bet that got you chicks. The best thing about making out in a truck is that it's limiting and means we could only go so far before telling you all no and making you take us home.

Pickup trucks and trailer Parks. Hmm, I always figured you for a more comfortable setting. Couch in the in-laws basement. Ata-boy Buzz

All
The first date the Mrs and I went on was as a result of my knowing the first line of REO Speedwagon's Time for Me to Fly and being the 94th caller. I took her to a seafood restaurant (she hates most seafood - I didn't know that at the time) and then we went to a George Carlin show that featured Leon redbone as the opening act. That made up for the seafood. At the time I drove a red '84 F150 (not the one in the picture but similar) and we kissed for the first time in that truck - and that was all. Not even 2nd base, but I can still smell the leather jacket she wore.

Fleur
Thanks for allowing me to crash your haiku.

Fishy
Get your mind out of the gutter young lady. This is first kisses and no, she doesn't read my blog.

Moi
It had a bench seat and I just had to make sure the shifter was in 1st gear. Chicks dig trucks because I can move their stuff for them.

Karl
Again, that's not my actual truck but a reasonable facimile. I almost didn't use it because I knew someone would say something about the trailer. It was the closest thing I could find and you know I'm a stickler for acuracy.

Uncle pouts ; "BuzzK's ride beat that ole Willis of mine."

I wonder, how many wives read their spouse's blog vs hubby readers of wives blogs? hmmmn...what does ya think BuzzK?

Aunty
Tell Uncle there's a lot to be said for the classics like the Willy - like put up the top and sides cause it's raining.

The Mrs does not blog nor does she read my blog (because I haven't given her the address). She Facebooks and is Linked In, neither of which I do or read. That's just the way it is.

nothings more romantic than an evening with george carlin (sarc!). grherhahaha well, I have a good idea about how you operate. and look - you got the Boys out of the deal.

Chicky
I really wasn't going for romantic on the first date, per say. I won the tickets and needed a date. The boys were not my idea either. I was coerced.