La Diva Cucina (former contestant on The Taste - Bwahahaha...sorry, I couldn't help myself) did a blog  a couple of weeks ago on a Meat and Potatoes Challenge that she undertook.  I mentioned to her that I was going to make my own meat and potatoes dish (actually meat and rice) and that maybe I'd post on it.  So here it is.

The Mrs. insists on doing most of the food shopping because she doesn't trust me to buy healthy food.  I like desserts and snacks - sue me.  Last weekend she came home with a London Broil (on sale).  Probably the most difficult (for me) cut of meat to work with because it always comes out tough.  I do have a soy-based marinade that works pretty good, but I have to know a day in advance that I'm going to make it and I'm getting a little bored with it.

Those of you who know how I cook know that I usually don't know what I'm making until I get home from work - and then I have like 45 minutes to throw it together.  So knowing I had the London Broil in the fridge, I did some recipe searching in advance of "steak night".  One other thing that is new to the nightmare that is my life - I need to get everything approved by The Mrs. ahead of time because of her fickle and bland taste in food.  The last time I strayed off this path, I made a dish with a cream based sauce that she refused to eat ("don't you know cream and cheese upsets my stomach?" ... "no?  I didn't?") and she didn't talk to me for several days.  Lesson learned.

I did some research and found Maria's Pepper Steak recipe on AllRecipe.com.  It sounded good, had good reviews and there were no ingredients on The Mrs.' no-fly list.  All I needed was her approval, which I received. *ding ding ding ding ding - winner!*

This recipe is pretty straight forward.  I noted several reviewers said that it could be salty or thin, so I kept that in mind as I prepped and cooked.  Also, I added a tablespoon of Worcestershire sauce.  After I had it all in the pan, the smell was very vinegary.  I tasted it and it did taste salty, so I added a couple of tablespoons of sugar.  And the sauce wasn't reducing and thickening as much as I wanted, so I added a tablespoon of cornstarch (mixed in a little water) and that thickened it up nicely.  What do you think? 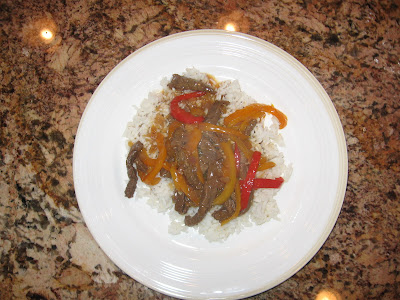 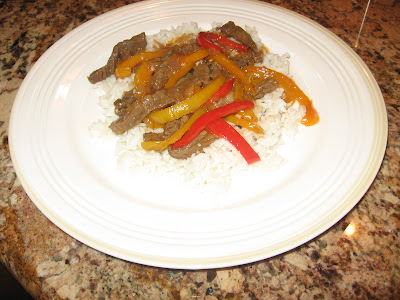 After Action Report:  When The Mrs. came home from work, she immediately commented on the vinegar smell.  I started to get nervous.﻿  But it was too late to do anything else but serve it (over rice).  This tasted great!  The steak could have been a little more tender (I may cook it a little longer next time) but the flavor was outstanding.  It had a slight sweetness, tangy from the Worcestershire sauce and not too vinegary or salty at all.  The Pudge had seconds.  And The Mrs. really seemed to like it.  Unbelievable!  This is a keeper.
Posted by Buzz Kill at 12:00 AM

Labels: Cooking, Welcome to my Nightmare

congratulations! It looks pretty with the colorful peppers sliced long like that. Im glad Mother of Pudge approved and you can sail through the day knowing you killed it last night. Sounds like a weird version of chopped: you have to throw a meal together with bland and unadventurous flavors in 45 minutes after a tough day on the rock pile, and make a family happy.

Whew! Ya' had me worriet some--the Mrs like it? RELIEF!

Always nice to add another "keeper" to the stack.

If the Mrs. gits too fussy, we's more adventuresome so come on down!

Chicky
Yeah, I had some red and yellow peppers that made it look appetizing. Practically every week night is a cooking competition for me. I never know what ingredients I have until I open the frig, and I never know what time The Mrs. will be home to time the whole thing. I laugh at the Chopped chefs and the "pressure" they're under. Bwahahahaha


Aunty
The restrictions The Mrs. puts on my cooking are - challenging. When she came home and said it smelled like vinegar, I thought crap, another night where she'll get pissed and not talk to me. Chopped chefs don't know what pressure is.

Haiku theme of week is up--wif' a twist.

I'm cracking up over Chicky's comment! Poor Buzzy! I'm so glad this worked out for you and it looks great! And well done on adjusting the seasonings and thickening. Corn starch works well for this sort of dish, as it's really a stir fry and Asian (kinda, don't tell the wife!) Wondra is also good for quick thickening, a different texture as it's from flour but you can add it in directly. You could easily add broccoli or spinach to this dish but knowing how picky you're wife is, maybe keep it to meat and peppers! My hat's off to you with all the cooking and time challenges you face daily!

Oh, fajitas is another dish (similar to this) that you can use this cut of meat as it's cooked quickly to keep from going tough.

Diva
You actually were my inspiration for this post.

I've done fajitas before, and The Mrs. likes them too, but I get bored with them. I may try a stirfry the next time (hold the broccoli - The Mrs. won't eat that either).