After having sat on the sidelines for a while, I'm finally able to make a dish for this weeks Dim Sum Sunday, sponsored by Big Shamu over at the Karmic Kitchen. The theme for this week is chilies. Once again this is an ingredient that I love but is rarely used due to the culinarily less-adventuress people who live in m house. However, this weekend I saw an opportunity - and took it.

The Mrs and I belong to a local swim club sponsored bowling league that meets once a month. This is a social league for drinking, eating, talking and, oh yeah, we sort of bowl while we're eating, drinking and talking. This is our 4th or 5th season in the league and we are paired with some good friends of ours from the neighborhood. Every couple brings whatever they're drinking (mostly beer and wine) plus some sort of food. Most people bring take-out or store bought food, but there are a handful that will actually cook. Everyone in the league puts their food out and it becomes a smorgasbord,

So this was my opportunity. I found Kickin Stuffed Peppers over at allrecipe.com and decided that would be a good one to try. It seemed a little plain as is, so I added some crushed garlic and some fresh thyme that I have growing out back. 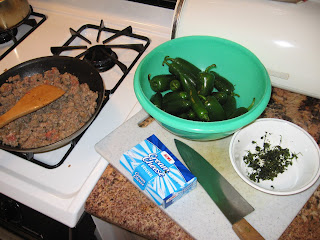 Cutting and cleaning the peppers (which were jalapenos that I bought down at the local Produce Junction) was the toughest part. I had a plastic bag on my left hand for a while, but that proved too cumbersome. So I just used my bare hand and was really careful to not touch my face and eyes. I should of had the kitchen window open because I did inhale some of the vapors and could feel it a little in my chest. 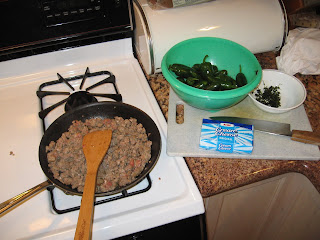 Anyway, I got the stuffing made, filled the pepper halves and got them in the oven. The last pictures were rushed because our partners (who were driving) came early to pick us up and I only had enough time to yank them out of the oven, snap a shot and put them in an insulated carrier. 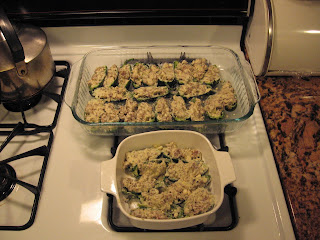 Also of note here is that the Mrs made a Mexican Salad because she wanted something to eat. It was actually quite good. I didn't get any pictures of it though.

When we got to the bowling alley, we were in lanes on the far side of our group. It so happened that another guy on the opposite side (we had about 40 lanes) made a stuffed jalapeno but his was with a cheese filling. The sausage and cream cheese was a surprisingly good combination for as simple as it was with just a hint of thyme. Both his and mine were the sensational appetizers of the night. I didn't take any leftovers home. 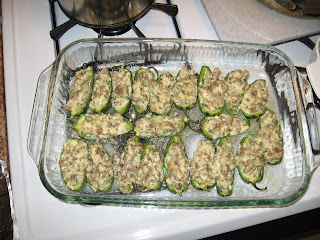 And our team won 2 out of 3 games. Probably because I didn't bowl (because of the procedure I had this week - still a little bruised) and used my average from last season.
Posted by Buzz Kill at 3:00 PM

They look really excellent and well-balanced. ACME? Isn't that where Wily Coyote buys all his road-runner killing materials?

BRAVO!!! I love how you were too bruised to bowl but not too bruised to cook. Good for you. Definitely look good to me and I like that there were no leftovers. That's always a good sign. For future reference, some grocery stores sell the thin disposable plastic gloves for just such an occasion. Of course if you're like me, you only remember this halfway into the process.

Thanks for joining in this week and I'm glad you're feeling better.

Yuuuummmmmm!!!!!! Is it wrong that I'm internally shrieking with laughter that Mrs. Buzzkill made her own salad "so she would have something to eat"??? And yet you had no leftovers, so SLAM DUNK. Woot! Signed, a fan who, like the Mrs., Does Not Cook.

We do something called Jalepeno Poppers out here that are similar to rellenos, but I like the idea of halving and stuffing. Seems easier. And these look GREAT!

I'll second Shamu's hint to buy the thin plastic gloves (latex or non-latex). They're indispensible if you're working with any kind of spicy pepper.

Wow, those stuffed peppers look amazing! They are similar to Poppers but those are only cream cheese and are breaded and fried, I like the idea of the meat stuffing. I also noticed on the recipe they stuffed red and green jalapenos but I hardly ever see them sold that ripe, guess you'd have to have two batches and wait for one to ripen! YUMMM!!!! Good job, Buzz! (glad your team won, I SUCK at bowling!)

I buy my gloves at Costco but you'd have them forever. I also sneeze a lot when I'm using chilies, they get right up my nose! I must agree with Moi, I was being very cavalier by not wearing them the other day when I stuffed my poblanos and my hands burned all day! Stupido.

I put a response to your dry meatballs on Sham's site. Yay! What a great DSS!!

Thank Moi for the DSS, she inspired it. However I was sad that no one wore expensive shoes for the Dim Sum.

Troll
Correct, that and cream cheese. You have Publix, we have Acme.

Shamu
I don't do peppers enough to warrant buying gloves. If I see them in the store, I'll pick some up anyway.

MakingSpace
The Mrs doesn't like anything spicey at all, that's why she went with the salad. I do the vast majority of the cooking at stately Buzz Manor so she doesn't have a problem with my cooking as long as I stay away from hot spice, beans of any kind, olives, pickles and fish. *groan*

Dani
Thanks, but I think the bowling group was just stroking me so I cook more things. Everyone is getting tired of pizza and wings.

Moi
Yeah, I've made poppers befor with cheddar and cream cheese but I don't like all the grease from frying. Even though it has sausage I think it's a little healthier - just a little.

Diva
The green Jalepenos were all I saw at the store. A guy in our community garden had a bunch of pepper plants with green, red and orange peppers, I was tempted though. A washed my hands a lot while I was handling them so I didn't mess up my eyes - this time.

Shamu
I did mine barefoot which is not a good idea when working with knives.

We make those stuffed chilies all the time. One of my favorite dishes.