Buzz and the Monsters vs. Cheap Trick

So we're sitting around the pool with some friends last Friday and the subject of concerts came up. My buddy says Cheap Trick and Squeeze are coming to the Mann Music Center in Philadelphia next week and we should all go. The Mrs (surprisingly) is up for this and she wants to take the Boy and the Pudge. I said "OK hon, get the tickets". The Mrs tells the boys and they're stoked for it. The Boy has been to a couple of local concerts including Paul Rodgers this past 4th of July. This would be the Pudge's first concert. Fine.

Well, come Sunday, my buddy and his family bailed and the Mrs tells me she has to take her sister out that night for her sister's 50th birthday dinner. That leaves me (set up) taking the boys. So I buy 3 tickets and I'm set for this Friday.

Now, my across-the-street neighbor has always maintained that he was a roadie for Cheap Trick about 10 years ago and still stays in touch with them. The Boy tells him we're going to the concert and he says he is too and can get us backstage. I say "fine" but I'm skeptical.

We get to the Mann around 7:00PM for a 7:30PM show. Not a big crowd (maybe 8 - 10,000) and the Mann is an outdoor amphitheater with covered and lawn seating. We have tickets in the 2nd section back about 125 feet from stage. Pretty good seats I think. So we take our seats and get ready for the opening act - Squeeze. Low and behold, there's my neighbor and he comes up and gives us three of these and says to meet him on the left side of the stage at 8:25: 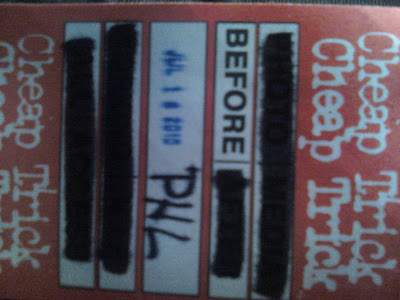 Squeeze comes on and I know Black Coffee in Bed, Annie Get Your Gun and Cool for Cats. Surprisingly, so does the Boy and he's only 17. There are a lot of Squeeze fans in the audience and, from overhearing conversations, a lot of British accents. The Pudge is a little bored because he doesn't know any of the songs but is kind of mesmerized by the spectacle surrounding him. Interestingly, I don't smell any pot and notice quite a few families. Not the concerts I remember from 20 plus years ago.

So, at 8:25 we meet my neighbor at the designated place with about a dozen other people and are escorted into a small room (full of laundry machines and bad lighting as you will see) and in walks - Rick Nielsen and Tom Petersson. Are you fuckin' kidding me.

Here are the bad telephone camera pictures to prove it: 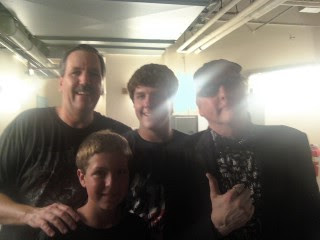 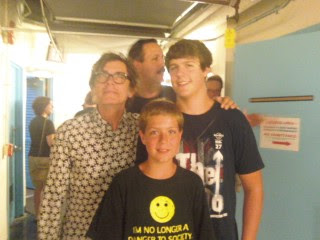 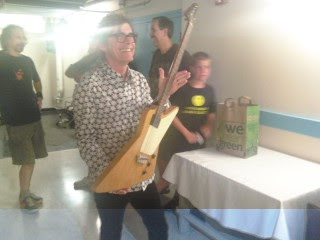 Both Rick and Tom talked to us for about 10 minutes. Rick "anointed" each of the boys with a guitar pick to the forehead. The guitar Tom is holding is one of two like it in the world. He said the manufacturer but I forget. And you can't see it but the shirt Rick is wearing is a Beatles shirt. We wished them luck and took our seats.
This is the view we had from our seats: 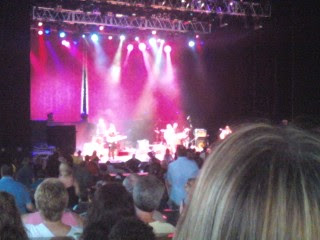 This is the view we had when the Boy took the Pudge up front, then came back and got me. We were there for about 15 minutes until security made us leave. We went to another place for a few minutes that was even closer to the stage (about 20 feet). Awesome. Rick has about a thousand guitar picks taped to his mic stand he constantly tosses them into the stands like death stars. It's pretty cool. He also brought out his trademark 5-neck Hamer guitar. 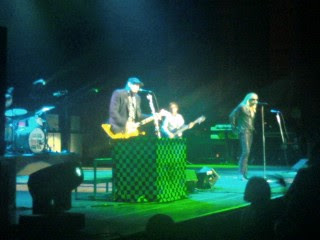 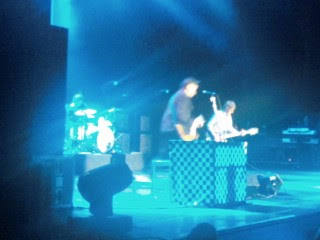 They did a lot of their old stuff mixed in with some new songs. My neighbor had told me that Rick was a huge Beatles fan and they did a cover of Magical Mystery Tour. They didn't do She's Tight, which is a personal favorite of mine.

Their finale was Dream Police and it was very much like this clip I lifted from a January 2010 concert down in Atlantic City. Same stage setting but what we heard sounded much better.

The boys (me included) had a great time. The Mrs was a little disappointed when we told her of our adventures. I told the Pudge that every concert he goes to from here on out will probably be a disappointment after this. He agreed. 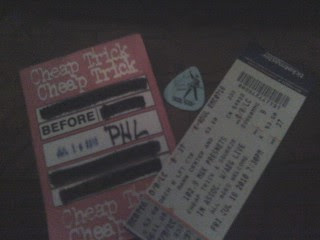 Woot! Glad all three of your had such a great time. Other concerts in the future may definitely pale in comparison, but there is no doubt your boys will remember this one - and that they went with you!

Completely awesome cool! When you were talking about your neighbor, I was seeing him as a bit like the roadie guy in Wayne's World! I suggested to Moi that we should all do a post about our first concert. Good for you for taking the kids, great bonding experience.

P.S. Oh yes, the Brits love Squeeze. I only know Cool for Cats.

Squeeze AND Cheap Trick?!? That. Is. Awesome. I am just a little bit verklempt thinking about your adventure and the fun you all had. Totally cool of you to take your boys. How did Robin Zander look? Still long-haired and rail-thin?

IE
At their age, going to a concert with my father was an impossibility. Mainly due to his poor taste in music (Mario Lanza, the Inkspots, the Mummers). There is some music of theirs I won't listen to but there is a whole lot more that we share (also a big difference between me and my old man). They lke classic rock and I like alternative rock; we disagree on rap. I've been to maybe 15 concerts in my life and this was the absolute best. The boys being there was gravy.

Pam
My neighbor is a lot like that guy. Shoulder length gray hair, floppy Austrailian hat with interesting stories. He's also a closet horticulturalist (and has a landscaping business) and we trade vegatables with him all the time.

We had one group of Britts next to us and the Pudge noticed that one of the guys (probably in his 50s) was crying during a song (I don't remember which one). So there were some really passionate fans there. I think a lot of Squeeze fans left after they were done.

I like the idea of a first concert MEME but I have a feeling a lot of us would have trouble recalling details - make that me.

Moi
Rob Zander wasn't backstage with us (I get the feeling they draw straws to see who has to do the meet-and-greets) but when we were close to the stage we could see him and he was still in great shape. He had leather pants on and he had to put his hair back in a pony tail because it was so friggin hot. His voice sounded great and he still has a lot of power behind it.

Heff
Best.concert.ever - for me anyway. I would put Rick Neilsen in my top ten alltime best guitarist list and to actually meet him - awesome. He's starting to show his age a little (he's 63) but when I told him it was the Pudge's first concert, he pressed a guitar pick into his forehead and said "I annoint you". He did the Boy too. Can you imagine having someone like that (or Eddie VanHalen or Angus Young) doing that to us when we were that age?

Dani
See above, it was incredible.

Great post Buzz. The boys will never forget it.

Impressive that you and your boys can enjoy time together in this kind of venue. I think I was in my late twenties before my father and I went to a concert together. Bluegrass not rock, Yet we had a good time.

Keep it together, the longer you do the better off they will be.

Madman
With what that night cost me, they better not forget. I'm looking to get a picture frame that we can put our tickets, passes, picks and pictures in so that it will be a reminder to us. Then I have to find a wall that the Mrs will let us hang it on.

Karl
As I explained, my father and I were on completely different ends of the music spectrum. Going to a concert with him was never considered by either of us. We always battled over the radio in the garage when we were working out there. He initially won of course. But me, my brother and my friends were the mechanics working on his van, so when he changed the station, we started leaving the garage (and the van in whatever condition it was in). He got the message and backed off of the elevator music.

Note that the original blog has been edited for content.