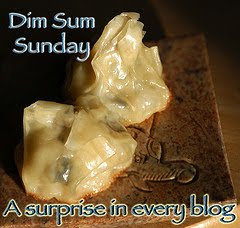 Big Shamu over at the Karmic Kitchen has brought out the 2 year anniversary edition of her popular food challenge for those of us that are cooking challenged - Dim Sum Sunday. The theme for this week is Potpies. A week or so ago I had to take The Pudge to the orthodontist to have his braces fixed (again). While I was waiting, I started leafing through the current Good House Keeping (I read it for the recipes. What?). I came across a different kind of potpie recipe that I had not seen before and decided that's what I would make for this challenge.

The recipe is Vegetable Beef Potpie. This is as relatively simple recipe that I modified slightly. The only ingredient I had to buy was pizza dough. Everything else I had on hand. I added a cup of celery because I had that in the fridge and thought that if you're going to call it "vegetable", it should have more than tomatoes, carrots and onion. 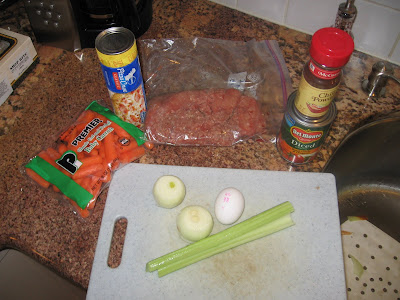 I chopped and cooked the carrots, onions and celery first. 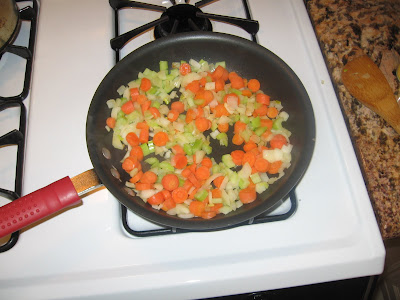 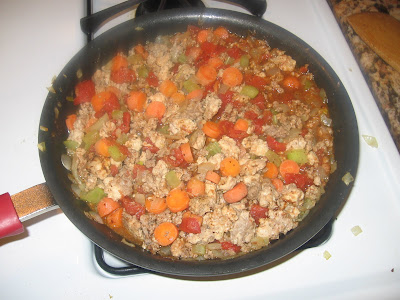 Here's where I got tricky. The recipe calls for the mixture to be poured into four small casserole dishes. I don't have those, so I decided to make one big pie and leave it in the saute pan (less dishes to clean too). I cut the dough into strips and did the lattice work. I don't do that to often so this took some time. And the heat from the meat mixture was softening and stretching the dough. I got it done and brushed the dough with an egg wash.

Now because it was a bigger pie, I decided to add 10 minutes to the baking time. But I was concerned about the dough burning, so I threw some foil over it for the first 10 minutes. When I went to pull it off, it stuck at several points because of the egg wash. I probable should have covered in more loosely and sprayed the foil with Pam. I freed the foil with a spatula, made some quick repairs and then back in the oven. 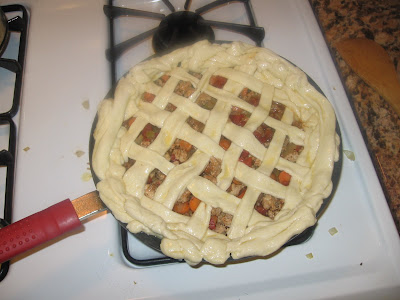 Anyway, it came out after 25 minutes looking really good. All were impressed. 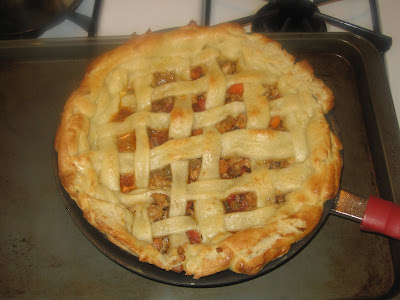 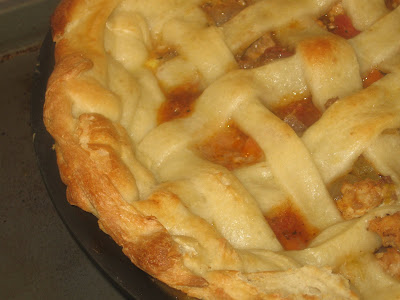 The verdict. Everyone (including the Mrs) loved it and the boys went back for seconds. The sauce was a little thin and I may add a can of tomato paste the next time I make it. The Mrs thought it was a little spicy (because of the chili and black pepper) but the rest of us decided that shes just crazy. 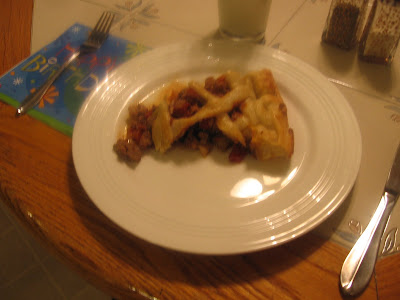 WoW Buzz, I am thoroughly impressed. What a beautiful and outside the box pot pie. You made it seem really easy and delicious at the same time AND your even got the Mrs. Seal of Mostly Approval. CONGRATULATIONS!!

I want to thank you for being the one dude in my little stable of DSSers who always puts out thoughtful and delicious dishes. I hope you will continue to play along because we certainly love seeing what you make.

Buzzy that looks incredible!!!!! I love your latticework and how you used your one pot so beautifully. I'm very impressed that Mrs. Buzz ate it with only minor whimpering!!!! And the kidlets went back for more, that's the true measure of success.

Awesome, Buzz! By the way I'm up over at http://makingspacethejourneyout.wordpress.com/2011/03/12/dim-sum-sunday-pot-pie/ and my kids went back for more too.

I want to thank you because back when I was thinking about getting involved in these DSS days, you were my inspiration, because you cooked for children too. Thanks so much Buzz!

Outstanding work, Buzz! Your lattice work is most impressive! And I love that you tried an unconventional recipe and succeeded in (mostly) pleasing all the picky palates at your house. You’re a talented cook who always brings something special to DSS, even as you work juggle your time constraints and family’s preferences. Looking forward to many more to come.

This is great Buzz! Like MS said, it's cool what you bring to the table for the kids. That's a tough job and you do it well.

Shamu
It's not so much "outside the box" as "inside the cupboard". I use what I have on hand. I will say that I was a little impressed with myself on how well this turned out. And if I have to cook the dinner, I might as well have some fun doing it.

Not many blog memes last 2 years, so congratualtions on holding everyon'e interest. You put the challenge up there and I'll do what I can do.

MS
You know better than anyone how tough it is to cook something the kids will eat. My challenge is compounded by a Mrs who's parents brought her up on mac and cheese and hot dogs. I find it more difficult to cook for her than the kids. I figure if I keep pushing the envelope of what she'll eat, I may actually change her palate. It's a dream I have...

IE
This dish was way easier than it looks. The tough part for me was the lattice because I didn't look up a procudeure for doing it (I'm sure there's one) and the dough got really stretchy from the heat. So I need to make sure I have a good hour to do this, but AI will make it again.

Dani
Yeah, the state says I have to feed them, so I might as well do something I enjoy.