That Movie Clip Wednesday movie maven, Boxer is hitting her stride as the political puppet master to us, the deep-cover operatives of Movie Clip Wednesday. This MCW Meme has everyone picking a clip from their favorite movies based on a weekly theme while trying to keep the clip or clips to around 3 minutes long. This week's theme is FAVORITE POLITICAL THRILLER. Political thrillers are okay but not my cup o tea unless it's tied in with a war theme. There are some classic (obvious) thrillers out there such as Dr. Strangelove, All the Presidents Men (which I actually found a little boring) and The Manchurian Candidate. I was going to go with Fail-Safe because of it's interesting (if not unbelievable) storyline but couldn't find a descent clip.

So I'm going out in left field (again? - you don't even play baseball) to pick a movie I watched a bunch of times last year and have been looking for an excuse to use. The IMDB story line is that he is a gun-for-hire known only as Agent 47 and is hired by a group known only as 'The Organization' and is ensnared in a political conspiracy, which finds him pursued by both Interpol and the Russian military as he treks across Russia and Eastern Europe. Do I meet the theme criteria? Good. I know I'm going to take some heat for this movie because it's based on a video game, but I selected 2007's Hitman.

Nika Boronina: What colour underwear am I wearing?
Agent 47: You're not wearing any underwear.
(Shades of Tallulah Bankhead)

Looking for more insufferable politicians, espionage and intrigue? Grab your passport and head on over to see what international incident that Boxer has caused for you.

A special "thanks for the memories" to Jane Russell who passed away this week. She helped many of us boys become men through her racy (for the time) films and could fill out a sweater better than Marilyn Monroe. 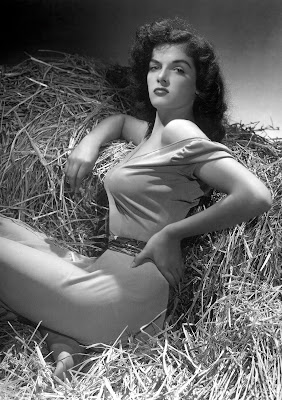 RIP to Miss Jane. I always preferred her to Marilyn. She just came off as smarter.

I actually like Hitman. Then again, I'd watch paint dry if Timothy Olyphant were wielding the brush, so what do I know.

Not only was Ms. Russell smarter then Marilyn, she was hotter. Sure makes black and white look good doesn't she.

Awww, I didn't realize Jane Russell passed away! My news boycott needs a few snippets to get through. Gorgeous lady. And I'm sure her assets were the real thing ... today's lads don't stand a chance on knowing what a real body looks like. Anyway, the thriller movie maybe not my style, but happy MCW anyway!

I cant believe Jane Russell has been alive all this time. She was something.
Never saw Hitman. Oh, I tried. But fell asleep. Thats how it is. I try and sit down and watch a movie too late and then zzzzzzzzzzzzzz. It DOES look like a video game. I wonder: when they made this movie did they also shoot the footage for a game like they do football games?

I'm going to research Jane Russell. She looks stunning there! I remember her Bra TV and Print ads for "the full-figured gal". Not sure if I've seen her in a movie.

Like Moi, I thought Russell wuz more of whata woman is--MM played at the girl-kitten a mite too long.

Never saw Hitman--but I like assassin movies--mebbe it could be a theme?
I'll choose Day of the Jackal, so doan nobody jinx me iffin' that theme comes up.

Wait, now--me an Uncle did see a George Clooney assassin movie last year--cain't recall the title, but the photography over Italy wuz fabulous.

oh, an one more thought:
ain't thar' any *other* church that people can abuse in their fantasy lives?

Errrrr,
I'm with Aunty on this one, I am just plain tired of the Catholic Church being portrayed as the genesis of Evil.

I saw that Jane Russell had passed away and I did a little "RIP Hot Lady." That photo is a classic and so was she.

This line made me crack up:

GOOD to know! I've never heard of this movie, but this is why I like MCW. Nice job.

haven't seen this one. i don't mind movies based on video games too much. perhaps it's because i have 2 boys.

Moi
You know a lot. This is just a really good action flick in the vein of Die Hard and Terminator. Lots of shooting.

Karl
This trailer clip really doesn't do the movie justices. I almost went with the color version of Jane Russell from the Outlaw because I knew you'd call me on the B&W. I just liked this one better.

Pam
Yeah, no silicone back then. Thrillers are not for everyone - I guess.

Chicky
Truth be told I didn't know she was still around either. She was 89.

How could you fall asleep during all the shooting? I've never seen the video game, so I don't know if they used any of the footage for subsequent versions. But this movie is based on the original game.

Troll
Jane Russell didn't make many movies and pretty much stopped in the early 60s. The Outlaw was probably her most famous and infamous. And it took me years to realize why she was doing the Playtex Bra commercials. I'm stupid that way sometimes.

Aunty
Jane Russell was the definition of voluptuous. Day of the Jackel was a good movie. I loved the crutch gun.

Aunty/Fishy
The Catholic Church is a big target. What, did you want them to do it in a mosque? Your lucky I didn't include the clip where the bishop's chambers gets shot up by an attack helicopter.

Boxer
When I'm hiring an assasin, those are good qualities. Just saying...

Foam
I end up watching a lot of Call of Duty too. Every time I try to go I get, Dad, wait...watch me kill so-snd-so...for hours.