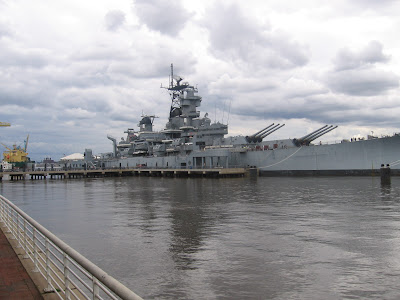 Local radio station WMGK hosted their inaugural Brew Fest on the Battleship USS New Jersey at the Camden Waterfront on 17 September - and I was there.  So was my sister L and my longtime friend Mo.  Every June, the Craft Brewers of New Jersey have an annual New Jersey Craft Beer Festival on the New Jersey.  Mo, L and I have been there before and had fully intended to go this year.  L and I even bought the tickets and I had a pass from the Mrs to go.  Until she told me that The Boy's graduation party was that day.  So L and I gave our tickets away, but Mo went.

Anyway, when WMGK decided to have their own Brew Fest on the New Jersey, we were all over that.  The New Jersey is one of  the most decorated ships in US Navy History.  And it's been a museum on the Camden Waterfront since 2001.  This ship is huge.  You can't really appreciate that until you go below decks and start walking the myriad of passageways.  You can do a self guided tour of the ship as part of your admission to the Brew Fest, but they won't give you your tasting glass until after your done.  They don't want drunks walking the ship because you will get hurt. 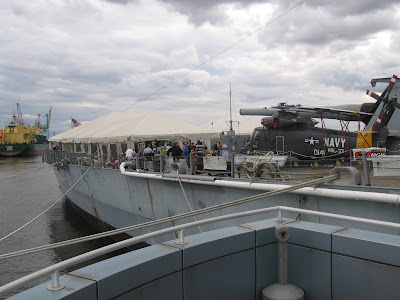 The festival itself is set up under tents on the fantail. They also had a classic rock band playing. Good size crowd too. I'd say at any given time there were 200 - 300 people in there. 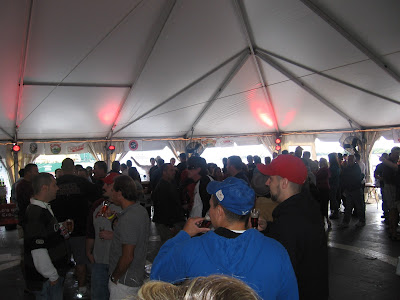 And then there was the beer.  Unibroue was one of the better ones (there were over 50 different ones to choose from).  They came all the way from Canada and had a La Fin du Monde which was very good.  Another beer of note was Weyerbacher's  Merry Monks, a Belgian style Abby Tripel that the 3 of us agreed was the best we had all day. 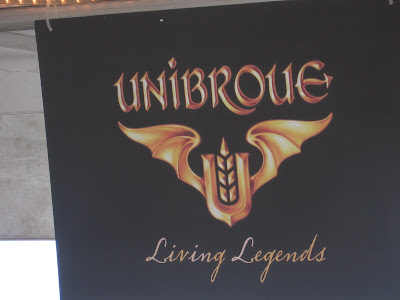 I also enjoyed Magic Hat's Number 9 and Hex beers too.  Our bowling league's theme for team names this year is beer and Magic Hat is our team name, so it's dear to my heart. 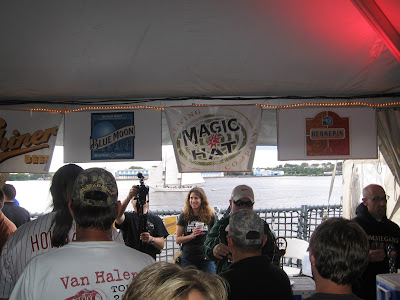 It was an overcast and windy day on the river, which the sail boats liked. 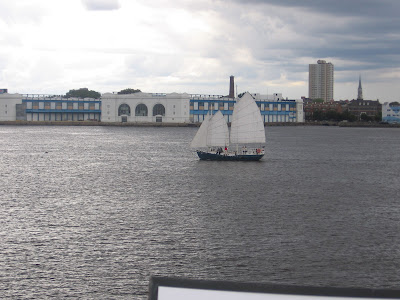 We camped out near the stern when the crowds got too intense.  From here we could easily get to the Unibroue, Flying Fish (a local favorite) and Woodchuck's Hard Cider. 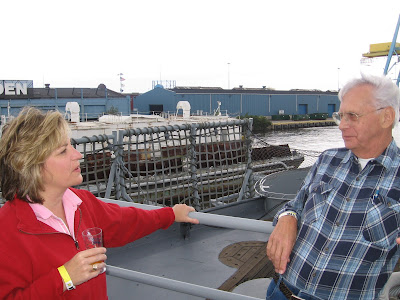 Here's Me and L hamming it up for a local photographer from who's site I lifted this picture. 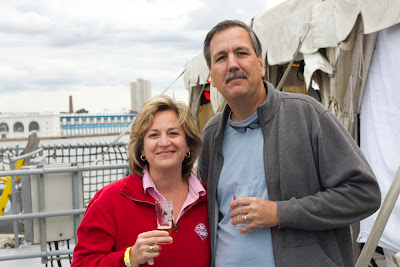 This picture of Mo too. All in all a nice day.  We probably sampled about 15 beers (all we had was beer in teeny-weeny little glasses ala Richie Cunningham from Happy Days - anybody?).  Some interesting cloud formations that day too.  Here's a parting shot of the ship's ensign flying in the wind from the flagstaff and what was left of my Merry Monks Ale. 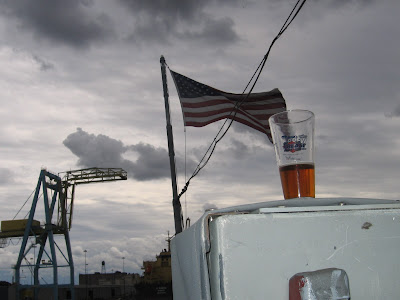 it is a beautiful ship and your photographs are very crisp which i like. A cool looking day - i love clouds like that. wish i could say i like "beery" beers - i dont. hate ales even more. I know real beer lovers sniff at modelos and coronas and sols, but thats what i take. mostly to wash down tequila which is really the only alcohol i drink. I was on the "cape knox" in new orleans back in september -wow was it BIG. I know just where those tents were set up. those walkways would be treacherous to a drunkard.

If you ever want to to know what Seattle looks like (nearly every day of the year) it looks just like your pictures. I love the last one with the flag blowing.

I'm not a big beer fan, mostly drink Corona light in my local Mexican place because they really don't know how to make a good vodka/tonic. Still, out here, it's big bidness.

That's a great picture of you. Keep posting!

Skies like that make me tug at my collar. And get all dramatic and wonder if indeed global warming (or is that global cooling, I can never remember) is not a myth and if the sun will ever shine again . . . but I love how they match the grey of the ships!

As for beer, I do drink more if it than I used to, although I'm still kind of a wuss in my tastes. My spousal unit and good friend, they're stout-drinking types. I don't understand that at all, it's like you're drinking a freakin' meal. I'm with Chickie: Cold, crisp, and Kölsch-ey to wash down thirst, New Mexican food, or tequila. If it's going to be stronger, it has to be a Belgian Ale.

Oh Buzzy, I know someone who would love to have gone to this with you -- my hubs, who loves all things mechanical and all things beer. Looks like a great time was had by all! I don't remember the Happy Days episode but have been to enough wine tastings to know about those tiny sips they give you (and around here when they do that, they can't sell you more either! -- another thing I am working on changing. I never thought I liked beer until met the hubs and he introduced me to proper beers. My fave is Sam Adams original or Octoberfest, so anything along those lines and I'm happy. But, also, if it weren't for tequila I'd have never met the man anyway. Glad life is fun and busy for you right now!

Yeah! Another hiatus post! Great photos, and it looks like you had a great day, with good friends! I've somehow turned into quite the sample-fest-going eggy lately - it's fun to try new things. (I'm working on getting up my pics from last weekend's chocolate fest . . .)

Seems like you and your lovely Mrs. are getting out and about more these days .... good for you!
Like Mr. Pam, Blowfish would have enjoyed this too.What a great outing, and great images. Probably inspires a haiku or two wouldn't you say? Haiku Monday theme is up at the Pond. Blowfish and I will be looking forward to your contributions.
Happy Weekending.

Chicky
I don't consider myself a beer expert or a beer snob. I drink all kinds, including coronas (the Mrs' favorite). It's not often I get a pass to go drinking. It being on a ship was just gravy.

Boxer
The last picture was my attempt at actual photography. I've seen Seattle skies and they looked better than this day.

Moi
Wackiest weather we've ever had (or that I can remember). I had an oatmeal stout one time (many years ago in Chicago) that was black as a cat and smooth as silk. Almost 9% alcohol and I still remmeber it. And Belgian Dubbels are great too.

Pam
I've toured the ship before (sober) and it's in great shape. They're engineering marvels. And you don't remember the Happy Days episode where Richie goes to a bachelor party and drinks 72 shots of beer? I just had some Sam Adams Octoberfest a couple of weeks ago. That's a good one.

IE
Everyone has their own idea of "festival". The only food they had here was pretzels.

Fishy
That's not the Mrs, that's my sister. The Mrs does like a beer after work (Corona ponies mostly - she can't drink a 12 ouncer) but she's not a beer fest kind of girl. And I might have a hiaku in me.

That's so cool your sister and you can hang like this! (you don't look much alike!) My FIL would have loved this day, he loves ships (being a navigator for the Royal Australian Navy for years) Can't say I'm a beer drinker for the sake of it but enjoy it with food, especially spicy. Wish I could get a BUZZ on it like my sister, it makes me full before I do! Nice to see more of you in your posts and glad you are so busy (in a good way!)