The Troll is having another Culinary Throwdown Challenge this week and the theme is Smoke and Fire. Some (the Mrs. in particular) may say that's the way I always cook. Hmmmm

Well, I knew what I was going to do for this throwdown last week but, as usual, I'm down to the last minute. The Mrs. is on travel this week, so it's just me, the boy and the pudge. I was going to do both smoke and fire, the smoke being grilled smoked potatoes. That never materialized. The Fire, however, I got done.

I decided to do a Bourbon Chicken which gets flambeed for the fire aspect. This is a recipe I've made before, formulated from several other recipes and mishaps so I don't have a formally written recipe and it changes every time. 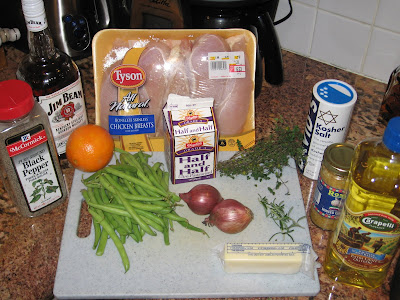 For this version, I have boneless chicken breasts that I salt and peppered and seared in butter, oil and garlic. I added onion, rosemary and thyme. Then I doused the whole mess with Jim Beam and set her ablaze. 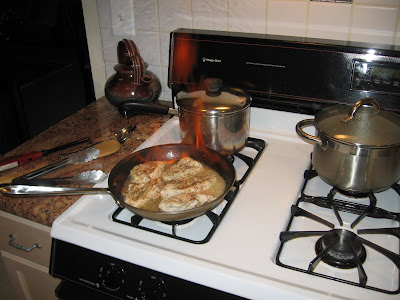 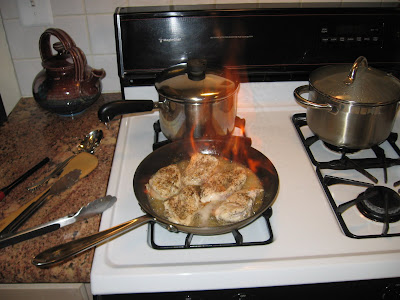 After the firemen left, I covered the pan and let it simmer for about 15 minutes. I removed the chicken and added a cup of cream. I let it reduce and thicken for about 5 minutes. 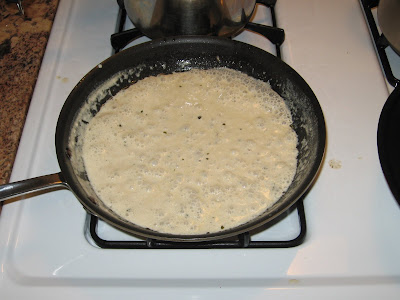 For sides I have rice and green beans with orange rind. 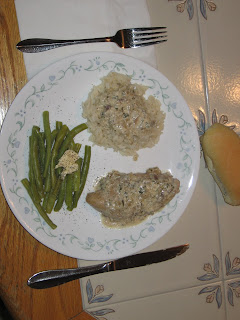 This came out good. The kids really liked it and went back for 2nds (mostly because the Mrs. wasn't here to say no). The boy thought it needed cheese - so I promptly smacked him in the back of the head.

And there you have another Mid-Week Madness Dinner that took about 45 minutes from in-the-door to the table. 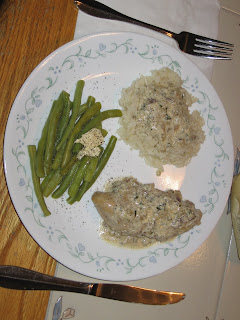 I don't know why the last 2 pics are sideways because they look OK in the viewer. Turn your heads.
Posted by Buzz Kill at 7:25 PM

I'd want seconds and thirds of the chicken and rice. That's good mid-week 40 minute eating!

I don't want to know what the boy was planning to top with cheese but I'm glad you corrected him.

I'm not sure how it tasted, but your narrative is the best grin, I have had all day! Did you feed the fireman?

That really looks good and easy too - which is a must for me most days. I'm going to give this one a try.

The fact that you call one of your children pudge makes me laugh until I can't breathe. The chicken looks pretty darn tasty, too, seeing as it contains two of my fave ingredients: Bourbon (hic) and cream (which, when mixed with bourbon minus the chicken is a tasty holiday beverage!) In other words: you got my vote.

Hey Buzz,
What a shame you didn't prepare enough to invite the firemen to stay for dinner. That was quite the flame you had going. I am impressed you can but together a fine meal, in record time, for your kids on a weekday AND
take the time to photograph the process and the results. There must have been a moment of anxiety when you grabbed the camera instead of the extinguisher . Very entertaining and kudos on an entry and a meal well served.
Fishy

Uncle says you win! ANYthing wif' bourbon wins when Uncle be de jedge.

Iam gonna try this one!!

Heh...I giggled when ya bopped the cheese requester upside the haid.

The boy wanted to put mozzarella on the chicken, hence the head smack.

No, the firemen only wanted those boneless chicken wings that Michael V made on Top Chef last week. I didn't have any.

SCM
This is very easy and I love the taste of bourbon in food.

Moi
Nicknames are a bitch and they stick with you forever. When he was 3 months old he weighed about 24 pounds and looked like the Michelin Man, hence the name. The onions, garlic, rosemary and thyme give it a nice flavor to complement the bourbon and cream. The only down side is the beige color but you could color it up with some chopped parsley or something like that.

Fishy
The flame was way more impressive than what hte picture shows. This is a typical weekday for me although a little fancier for the challenge. Tonight is sloppy joes.

Aunty
The boy watches cooking shows and thinks he knows all there is to cooking. Sometimes his ideas are OK but not that one and I let him know it. Uncles' right by the way.

Mr. Boxer is a bourbon FREAK, so I've printed this out (sideway pictures and all) and I'm taking it home. I want him to see there are other ways to use bourbon. *hic* Nicely done and I'm glad you and the boy had some fun together. What a good Dad.

Boxer
Good luck with the dish. Keep a lid next to the pan before you light it up just in case things get out of control.

Other then his critique, the boy had nothing to do with this dish. He generally comes up from his XBox play 5 minutes before dinner is ready and asks if he can help. I've been trying to get him interested in cooking but he has a short attention span. He does have his cooking moments though. In the mean time, I will have to "endeavor to persevere".

Oh sure, I HAD to look at your post before dinner time! Man, does that sound/look good right about now. I loves me bourbon and cream too and agree with Moi about the pudge. Too freakin' funny!

Hey, if you like bourbon, do you like it in sweets? I have a killer recipe for pineapple upside down cake with macadamias and bourbon. It's super easy. Made it for my girlfriend's b-day once and we ate the entire pan with forks while gabbing. If you are interested, my email is on my post (I'm up finally!)

I'm up at Bite the Apple with my verdict!

Buzz! I totally admire a man who can cook like that every night of the week. You're my cook-for-the-kids inspiration. Funny, I never thought to smack them on the back of the head for dissing my cooking and asking for something else. I just figured they were right. Now I may be developing the confidence to join you. Won't be lighting up the chicken any time soon though... LOL

Geez, everytime I come back and look at this I start to drool. I could eat this right now! (for breakfast!) Hey, I've got the new challenge if you are game!