Moi asked me for the stuffing recipe that I featured in my Thanksgiving Nightmare Family Get-together. I forget where I got it from, so I'm posting it here. It includes changes I made to the original, so I guess it's now (technically) my recipe. The original called for 1 cup of chicken stock, but I ended up going with about 4 cups because I like very moist stuffing - so use your judgement. I also used more pair, apple and onion then called for too because that's how I roll.
Enjoy. 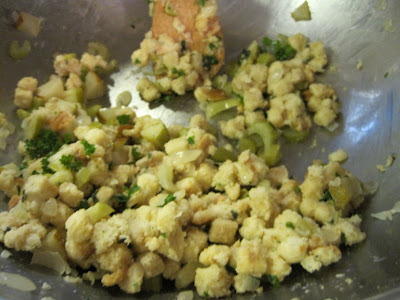 I love it. I can substitute the chicken broth with vegetable broth and have a fabulous stuffing. My brother (vegetarian) brought the stuffing last week and he said it's all about the sage? Do you agree?

You didn't mention the apple and pear except in the ingredients list.

All
As Troll pointed out, the pear and apple were left out of the instructions. I hit this same snag when I was making it and forgot to revise the recipe. So I re-read through it and made some additional edits to reflect exactly what I did. I cooked the apple and pear with the celery and onion. I did not use water at all - just chicken stock. Sorry for the confusion.

Boxer
Yes you can. And I used stock instead of broth because I think it gives it a richer taste.

I would partially agree with your brother about the sage (herbs in this case) but also the bread cubes. I used the arnold packaged cubes to save time and it came out good. I'm sure using your own toasted bread would be better. The Boy likes cornbread stuffing so I may substitute cornbread next year (with the Mrs' seal of approval).

Pam
Stuffing and cranberry sauce on a sandwich is good too.I also just fried up the last of the mashed potatoes (potato pancakes) this morning to go with my eggs.

Troll
Thanks for keeping me honest.

Mmmmm . . . thanks. I notice you leave the peel on both the apple and the pear. Whenever I do that, though, I find the peel slips off when I chew it and that can be kind of annoying. Did that happen here or does the peel stay on?

Moi
To be honest, I didn't notice the peal at all. You do get apple and pear flavors in different bites and that made it interesting.

I must give Donna the Stuffing ! (recipe)