I'm going to have to make this quick because I'm short on time (that's different for you Buzz). I had to take The Pudge to Summer Camp with the Boy Scouts today and I didn't get home until 5:00PM. So it was a mad dash for the smackdown.

Eggplant! Hey, I have one of those. If you'll recall, I had one lone eggplant in the garden. And I picked it this week, along with a jalapeno pepper to make a recipe that Fishy graciously shared with me.

Heat a large non-stick skillet, cook slices for 3 or 4 minutes on each side until lightly browned.

The only change was the sesame seed oil - didn't have any. So I used olive oil and sesame seeds. I also only marinated for 1/2 hour. 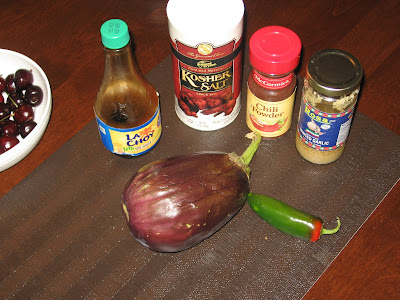 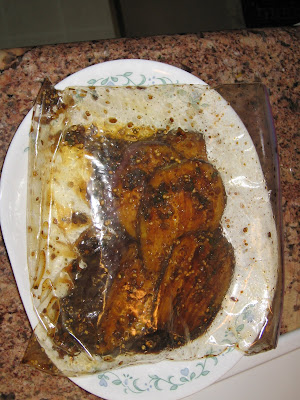 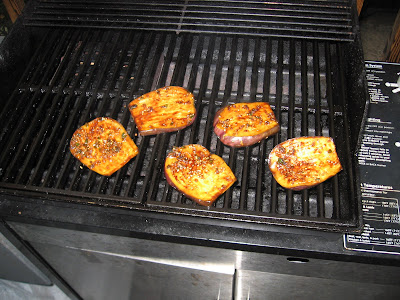 On the Weber. Love the grill marks. 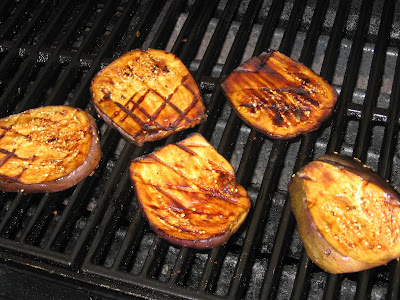 I finished with some freshly grated parmisian. 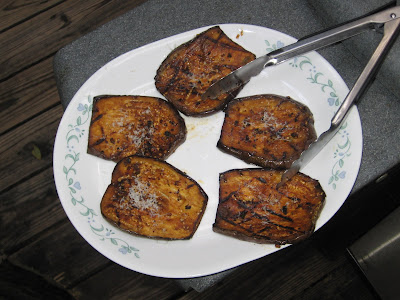 What to make for the rest of the meal? The Mrs bought these Hilshire cocktail weenies about 6 weeks ago and I've been tripping over them in the refrigerator the whole time. So I found a recipe called BBQ Hot dogs and Rice and a whipped together a tomato-cucumber salad with fresh basil and oregano. Done in 45 minutes. 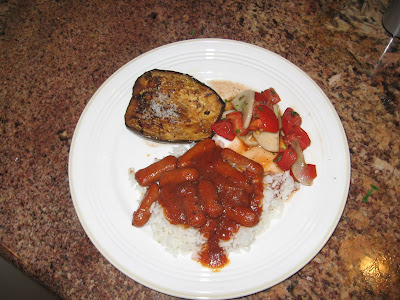 Everyone was good with the eggplant. It had good flavor that I think would have developed had I marinaded it longer. And it wasn't too spicy either, so the Mrs liked it. The Boy had The Squeeze over and she didn't care much for it. But then again - she goes out with The Boy.

Lame entry, I know but an entry none the less.

I wish I could eat egglplant because this would be a good one to have Mr. Boxer make for me!

Boxer
It's an acquired taste, I guess. This is as simple as it gets. I may try it again (with a store-bought eggplant) and let it marinade overnight.

Whoa! You tried this!!!! Good for you. How was the jalapeno flavor? Not too spicy? Love that you elected to grill these rather than pan sear them.
Who has the more important to please taste buds?
The Mrs.?
or
The Squeeze?

Grill marks rock! Huh. I wonder if I made this for S.B. and told him it was a mushroom, he'd eat it. Secret to a stress-free marriage #345: Lying.

Looks good to me, BuzzK.

But....now that the smackdown is over , an wif' all that free time PLEASe doan fergit I'se whistlin' fer ya from the Porch.

Buzz, thanks so much for squeezing this Smackdown entry into your busy schedule! Love the marination and grill marks! I'm finally up with Team Eggplant's offerings.

No. I am sorry. This is all kinds of wrong. Hot dogs and rice? are you kidding me. But you (and everybody) lost me at "eggplant" grherhahahaha. You can bake it, parboil it, fry it, eat it raw, saute it, broil it, marinate it.....its still eggplant in the end. Poor squeeze! SHe needs to arrive on a Buzz steak night.

Fishy
This was not spicy at all and I think it was because of the short marinade time. I will tell you the jalepeno was hot because I got some in my eye.

Moi
If you trim the skin off of it and take out the seeds, I think you could pass it off as a shitake. It kind of has the same texture.

Aunty
That's what I call all of his girlfriends. Watching too many old detective movies I guess.

IE
Squeezing the smackdown - I get it. Thanks for hostessessessing.

Chicky
Hey, I was staring at these things for 6 weeks. I don't know what was in the Mrs' head when she bought them...and I had like 20 minutes to come up with something. I'm actually having leftovers (and there really wasn't that much) for lunch.

Eggplant is one of those things that never really looks appetizing, no matter how you prepare it. It comes out of the garden, so you eat it.

And the Squeeze ate all of the hotdogs and rice and some of the cucumbers and tomatoes...but didn't touch the eggplant. It's one of those deals where The Boy shows up 15 minutes before dinner and tells me the Squeeze is eating with us, so I can't plan something for her. You pop over unanounced and you takes your chances. I may keep some haggis on hand - just to prove a point.

Smackdown results post up, and thanks again for playing, Buzz. Please tell me there is not a Battle Haggis in my future :)

Haha! I like your comment about haggis, too right! I really like grilled eggplant and I think the soy helped to make it look and taste so savory! Well done, Buzzy. (I don't get the cocktail dog purchase either but I do get that you can't let food go to waste!)

Yum - I love eggplant, and this seems like a really interesting way to prepare it - I have to give it a try :-)
Sue