How I Spent My Weekend

I've posted pictures of my deck before and as some of you may remember, I built it around a tree because I thought it would be cool. In doing so, I grossly underestimated how fast the diameter of the tree would grow. So twice now, I've had to widen the deck around the tree. The last time I did it (about 7 years ago) I had access to a Sawz All at work. I don't anymore.

For the last 2 years I've realized that I needed to cut the deck back and have pleaded for a Sawz All for my birthday, father's day and Christmas - to no avail. I even sent the Mrs a link for the Milwauki Sawz All that I wanted. This past father's day, I did the same thing and told her I would need to buy it if she didn't. She finally got the message and I got a new Bosc Sawz All (yeah, I know) for Father's Day.

So this was the weekend for the cutting before it got too hot. Here's the tree. 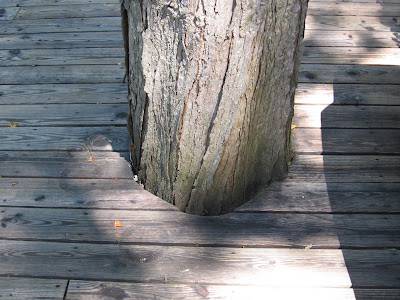 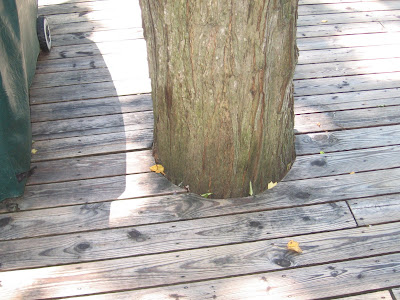 Because I (make that the Mrs) waited so long, the tree is applying outward pressure on the boards, which tends to bind the blade. This maximized my wood-cutting, sweaty fun. 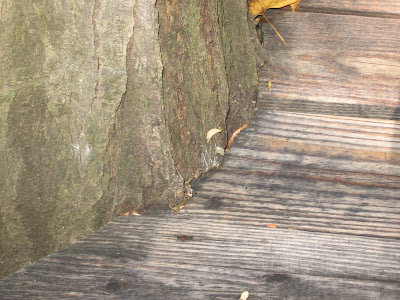 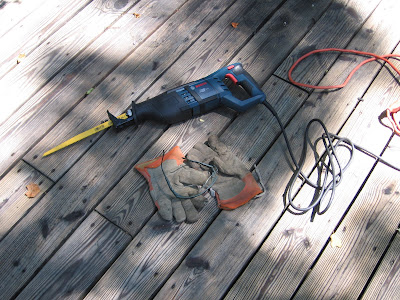 Two and a half hours later and about 6 1/2 linear feet of cutting, it's done (I'm sure my neighbors loved me). I had to cut through some of the box joist that I built around the tree. That made the total thickness in some spots 10 " thick. 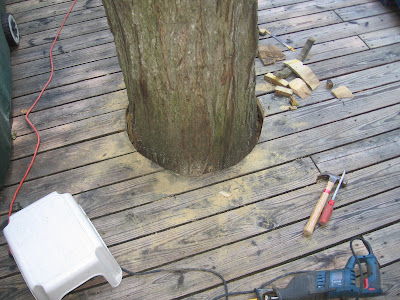 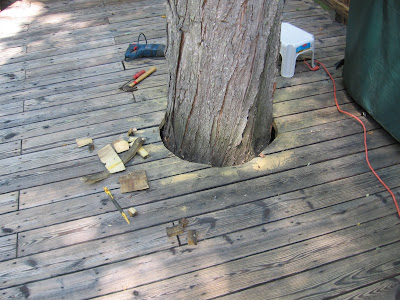 I sweated an awful lot and my arms and wrists were killing me when I was done. I should be good for another 5 years or so. Well, I did get a Sawz All out of the deal and they come in handy for a lot of things. The next project will be to replace a section of garage door and I'm sure the Sawz All will play a part - even if I don't really need it (cue Tim Allen grunt).

Update: That night (after I showered and pumped myself full of pain killers) we went to our local swim club for the annual "Pool Jam". It featured 2 bands (yeah, at our swim club). One was from our club called Band Test. They did a lot of Tom Petty and Stone Temple Pilots. They were pretty good although the lead guitar had a problem with his sound (in that ou couldn't hear him over everyone else). The base player is a friend of the Mrs and me.

The other band was from a swim club in another development called The 8E's (yeah, pretty cheesy). They did Blondie, Thomas Dolby, the Violent Femmes and finished with Cheap Trick (which I really appreciated). Then the Mrs helped me out of the lounge chair and drove me home.

wait. after even sending a link you didnt get the sawz all brand you wanted? arrrrrrrgh. you did a nice job and i like that tree coming up through the deck. Listen, I have plenty of honey do chores round here that can use a sawz all operator. I have vicodin!

Did you start at dawn to minimize chances of heat stroke and maximize neighbor annoyance factor?

First, I think it's very cool you built your deck around the tree and I'm glad you finally got the equipement you needed, but I usually rent this kind of schnizz from Home Deport?

As for pain killers, there's nothing like iced vodka (liquid valium) after a day of projects.

"Swim Club" makes me think of the east coast and even Caddyshack. I have no idea why.

S.B. regularly sends me helpful links to potential birthday, Christmas, and thank you for unclogging the nasty drain/mowing the lawn/removing the four foot centipede from the bathroom presents.

And I obey to the letter.

Unless Home Depot/Guns 'r' Us happen to be out of that specific thing, and then I have to unfortunately wing it.

Perhaps the Mrs. had to do the same?

I cannot live without my SawzAll!
So much so that I currently own 2 of them.
I use it for soooooooo many things!

The deck built around the tree?
FABULOUS! =)

Heff
You know the old adage about the crack of Dawn? Same deal here I guess.

Chicky
I know, right? All I can think of is that she was at Lowes instead of HomeDepot. I used the Milwaukies when I was a mechanic and we beat the crap out of them - and they kept right on cutting.

Actualy, it was more like ...but don't give yourself awaaaaay a a a a a awaaaaay. We almost lost Cheap Trick this weekend to a freak storm. Cheap Stage...

Troll
We (I) have a rule of thumb that I don't start engines or power tools until after 9AM. By the time I got my shit together it was like 11AM, so nobody was allowed to complain.

Boxer
Cool actually traslates to cheap. The tree guys wanted $800 to take the tree down. I've been wanting a Sawz All for ever. This was my excuse.

Our swim club is no Bushwood (loved that name) but I've always liked it.

Moi
On the flip side, I just said thank you, it's exactly what I wanted. I've learned long ago not to question (or criticize) the logic.

Scarlet
Two? One for each hand? My kind of woman.

If your weather was anywhere near as hot and steamy as ours was, glad you survived your weekend. I’m sure that tree provides some pleasant shade, even if it’s an ongoing issue. And you got a (semi-)swell tool out of the deal :)

Do you need more pictures of Blowfish repairs to feel good about yours? He fixed the hammock and then he "fixed" the yellow chain ... he spray painted it green. Alas he saw no need to move the chain to do this. A portion of my hundred year oak has green paint graffiti. It is a wonder that man is still vertical.

I think your deck is lovely, especially the tree.

PS) On the school loans and funds, etc. Your son has to move out of your house, have a job,
prove he is self supporting for at least one year and then he, not you, can qualify for student loans. UNLESS, you have been responsible and put money in a college fund in your child's name.

In this new America the responsible will not go unpunished.

IE
We're getting into the 100 degree stuff by the end of the week. That's why I wanted to do it this past weekend. I like this tree because it shades the barbecue. The other side of the deck gets a few hours of sun to satisfy the Mrs sunbathing Jones. Semi-swell tool - you're still talking about the Sawz All, right? Bwahahaha

Fishy
I don't need to feel good about what I've done. It's more proof that I don't exagerate about stuff I have to do. Tell Blowfish I do all my spray painting in the garage with wads of newspaper so I don't have to hear about overspray and spills.

We have saved for The Boy's college. Just not near enough. And of course the only school (out of 6 he was accepted to) that didn't offer any kind of merit scholarship - is the one he chose. He's on campus the 1st year, so there will be no independence. I'll be expected to suck it up and put off retirement for another 3 years or so (74 is a good retiement age, right?)

And if you made a bet about the Mrs' ability to cook - you'd lose big time. She'll be the first to tell you she doesn't like to cook and, consequently, is very bad at it. She has messed up frozen pizza (didn't take it off the cardboard) and jello (used only half the water required). I blame her mother.

Darn engineers they never get the design right the first time.Before you built the deck you should've sat down and looked up the type of tree to estimate its proper rate of growth added 20% for a safety factor and you wouldn't have had to torture yourself so.

Personally I hate the saws-all. I have two a Milwaukee and a Dewalt (batterie powered) The Milwaukee is a much better tool. Yet if you need to work away from a power source the Dewalt does the job. (Until the batterie goes dead halfway through the cut) Both of them are hard on hands and wrists. Good to see that you had most of the proper PPE, but where is your ear protection? If it's loud enough to annoy the neighbors, it's loud enough to hurt your ears.

Gorgeous tree an' deck! Know they both is a source of pleasure.

I ain''t got a scintilla of a syllable to say on saws or tools. so happens, we's got a tree growing through our deck (an part of the porch roof) but Uncle would faint iffin' ya tole him he had to do somethin' like scribe around that tree--he thinks woodsmanship outguns handmanyship (but he be WRONG). So--I IS IMPRESSED WIF'YA', BUZZK!


BuzzK, when can we hope to see yore garden--community garden? With or without marigolds?

Karl
If I had figured all of that out 17 years ago, I would have had a gap around the tree big enough to lose a kid in. Aww, damn - I see your point...

A battery powered saw would have lasted me about 5 minutes. The cords a nuisance, but in this case it's worth it.

And do I tell you how to set underwater charges on train trestles? No, I don't.

Aunty
I'm sure Uncle would deal with the tree if he had to. You know what they say about necessity...

And I'm working on a garden post all ready. Look toward the end of the week.

lots of funny comments on this post! In atlanta power tools and leaf blowers are the bane of weekends. thats why go to the chickory. my neighbors are mostly too far to annoy me except for Nephew's cousin: if you like Lynard Skynard full blast with sub-woofers and brush fires from burning t.v's in a barrel then you'd love it. Thankfully, nephews cousin is an unmotivated handyman and i never hear tools of any kind, ever.

Chicky
Yeah, all this material just from cutting a hole in a deck. My life makes great fodder. In the fall around here (it starts in early August) everybody has a leaf blower. What's the "burning TVs in a barrel" about? Is that a Southern thing?

Swim clubs have their own bands? People are taking this SoJersey Springsteen crap way too far.

Czar
To clarify, these 2 band's members are also members of their respective swim clubs. The 8E's are more professional and do parties and bar mitzvahs and the like. The Pool Jam is a capital improvement fund raiser they have every year and these guys (and girl) volunteer to play. These are small (our club has maybe 100 families) development swim clubs - not rich at all.

Springsteen is a North Jersey guy but does have a huge South Jersey following. And neither of these bands did any of his songs.