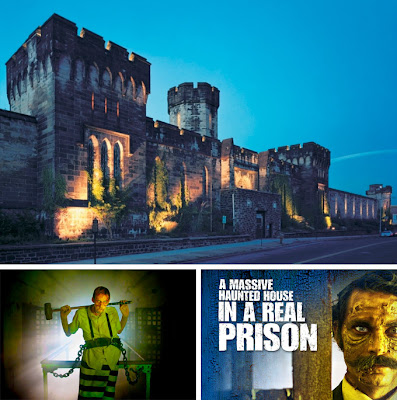 Turns out, right here in Philadelphia, we have the “Number 1 Haunted House in the U.S.” as rated by AOL City Guide (does anyone still use AOL?). And they are correct.  Terror Behind the Walls at Eastern State Penitentiary is without a doubt, the best haunted house I've ever been in.  I took the boys last year and The Pudge wanted to go again this year with a buddy of his who had never been there before.  The Boy is away at college, so he wasn't part of this.  The Pudge's buddy, Birch (I made that up to protect the innocent) is in Boy Scouts too.  But more importantly, his uncle (with whom he lives) runs a major, neighborhood haunted house in his backyard every year.  So The Pudge and I felt it appropriate that we take Birch with us.  The two of them will be part of the uncle's haunted house again this year, so I don't have to take them out trick-or-treating anymore.

The uncle starts constructing his haunted house in August, and he really does a good job.  He's an English teacher and a published author of horror novels (go figure) although I have not read any of them.  He has never been to the penitentiary and I had hoped he would join us, but he had his own project to finish.

A note about Birch. I was a little concerned taking him to this because he came from a broken home and has some minor psychological problems. The Pudge has been friends with him since he transferred to his elementary school in 3rd grade. His uncle assured me he'd be okay. And he was, but I had that in the back of my mind the whole time we were there.

Anyway, the Penitentiary, opened in 1829 is massive.  Surrounded by 30 foot stone walls and covering 11 acres, this place is huge.  Al Capone did his first stint in prison here in 1929 - 8 months for carrying a concealed weapon.  It was abandoned in the early 1970s and fell in to disrepair .  It was opened again in 1988 as a historic landmark for tours and for the Terror Behind the Walls tour in 1991. 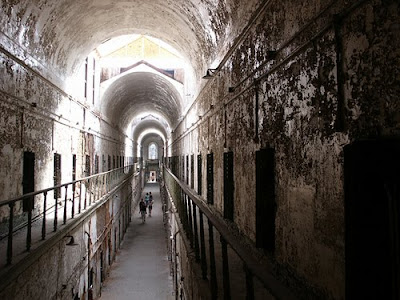 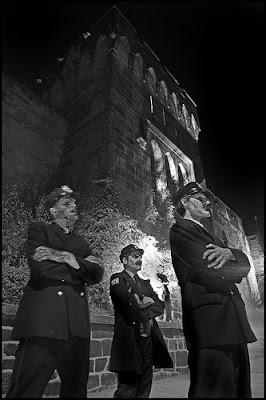 I decided to go last Sunday night (02 October) because it's less expensive and presumably less crowded.  Street parking is tough because the prison is surrounded by row-house neighborhoods.  We got there around 7:30PM and found parking about 5 blocks away.  The ticket line wasn't too long and neither was the line to get in.  I was able to pass Birch off as a 12 year old for a half price ticket (yeah, the boy scout in me wasn't too proud of that, but they made money on us at the concession stand).  He's actually about 4 months older than the Pudge but very small.  I think his mother had some drug problems while she was pregnant - but I digress. 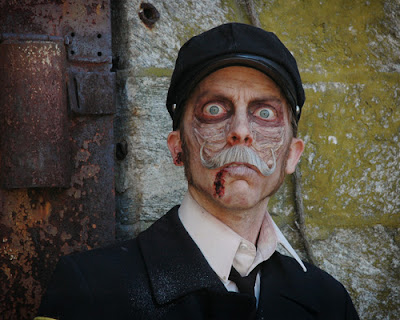 Part of the adventure is waiting in line.  They have dozens of actors in Hollywood quality special effects make-up that walk the lines and scare the crap out of people not paying attention to them.  They will even crawl up the middle of lines and sneak up on unsuspecting people (women mostly) - you hear screams every couple of minutes.

Once you're in the prison, you go through different sections such as the infirmary and the prison block.  The place is run down and gives it that "Munsters" look, but completely safe.  There are actors everywhere, jumping out, making noise and opening doors and windows.  It's mostly dark or eerily lit, fog machines everywhere and a lot of other surprises.  It takes the better part of an hour to get through everything and is not for the easily scared or claustrophobic (The Mrs - she never goes to stuff like this). 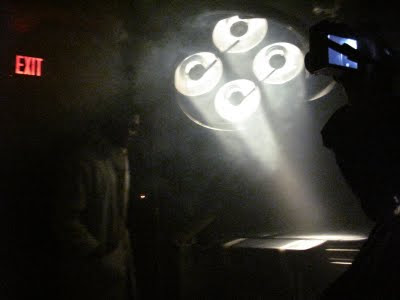 About half way through, we saw a couple of security people (non-costumed) talking to a teenage girl who was totally freaked out.  She did the rest of the tour with her head pressed into her mother's shoulder.  At the end, we had drinks and funnel cake.  While eating, we watched the actors sneak up on people in the concession area (who thought the show was over).  That was fun to watch.  We even saw one guy sneak up on an actor, who was sneaking up on an unsuspecting patron.  The actor bowed to the guy after he had been frightened. That was really funny. 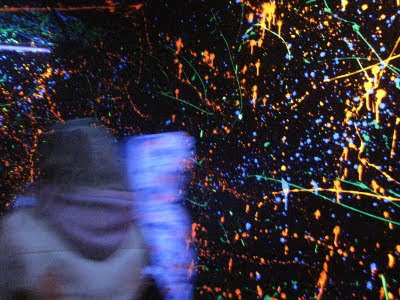 It was probably around 9:30PM when we left, and going out we noticed the line was huge.  When we got there, I would say there was maybe 50 people in the ticket line.  When we left, there had to be 500 people in line.  After 9:00PM is half price for students, and there are several colleges in the area.  I'm glad I wasn't part of that.  All in all a good time was had by the three of us. Unfortunately, they don't allow pictures, so I have a few "borrowed" ones so you can get a feel for the place.  We'll probably go again next year.
Posted by Buzz Kill at 12:00 AM

Labels: Halloween, Welcome to my Nightmare

I refuse to believe you cheated on the ticket prices! It's good to read there is more to life than working these days. How is 'the boy' liking his college of choice?

nice write up and what a cool way to use an old prison. I've never been a fan of haunted houses. I went to one as a child and it freaked me out. If I want to pay to be scared, i'll go to a new hair dresser. However, I think they are perfect for those that like them and you were nice to bring along the other boy. I laughed when you said you lied to get the cheaper price on the ticket.

"If I want to pay to be scared, i'll go to a new hair dresser" GR$RRHAHHAHAHAHA!~ That happened to me last weekend! I love the idea of this haunted house! I'd be too terrified to go through it, but I bet Kymster would in a heartbeat. THis looks fantastic! I'd probably be terrified in that building on Memorial Day, let alone Halloween. Holy cow, that looks like fun.

Guess I'm like the Mrs. in this arena - I'm not big on haunted houses. But I enjoyed your report, especially since no one was sneaking up on me. The guy who snuck up on the actor sneaking up on the unsuspecting patrons - now that's funny!

Good to have you back, Buzz! (P.S. Any chance you'll have time to join in this month's Culinary Smackdown?)

Fishy
I let the boys talk me into it, but we spent $25 on food and drink, so I can live with that.

We went and saw The Boy over the weekend for the university's family weekend. He is doing really well with campus life. He was inducted into the university's ambassador corp (1 of 25 freshman out of 150 candidates) and he was really in some impressive company. All very personable and well spoken men and women. He also won one of 10 open senate seats in student governemnt (one of his campaign signs was a Charlie Sheen quote - kids). So now he refers to himself as the ambasador-senator from New Jersey. Just when I thought his head couldn't possibly get any bigger. His grades could be his downfall. He has midterms this week and biology is not his friend.

Boxer
I threw in that antidote about the tickets just so everyone won't get the wrong impression of me - that I'm perfect. Bwahahaha I'd actually like to take the daytime tour sometime just to learn more about the pen's history.

Pam
I go to a hairdresser (not a barber) and she doesn't scare me one bit. The Mrs and I have been going to the same hair dresser for over 20 years. I think we paid for her nice house.

IE
The guy sneaking up on the actor was definitely the funniest thing of the night. I don't think that happens too often.

And yes, even though I haven't said so, I intend to participate in the smackdown. This weekend if all goes as planned - whicjh it never does.

oh this is a cool post--wish't I'd been along fer the scare.

Put the ticket price in the poor box so Fishy woan strike out.

Aunty
If you like a good scare, this was the place for you. With the way things are going, I may be needing that poor box myself.