Dim Sum Sunday - How Does Your Garden Grow?

How does my garden grow? Well. that's hard to say right now. We just started it this past Saturday and it's not my garden, it's the wife's. In our town we have an old farmstead that's about 200 years old and was made a public park (I think its a Green Acres protected tract of land). As such (and because it use to be a farm) the town started a program a few years ago where they would let residents tend gardens on 25' X 25' plots. This year it was really hard to get a plot what with the economy and all (we were #42 on the waiting list). As luck would have it (and my decision is still out on whether this was lucky or not) my neighbor has 3 lots in the park (because he's a founding gardener) and he graciously let us have one.

So the Mrs., the boy , the pudge and I spent most of Saturday tilling the soil, putting up a deer fence, putting down anti-weed plastic and actually planting some tomatoes. The Mrs. has grand plans and many pots of starter seeds going in the driveway that will add to this garden. When we'll have time to do this is any one's guess (the calendar this week is a horror).
Anyway, here's what it looks like so far. 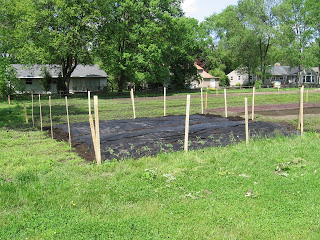 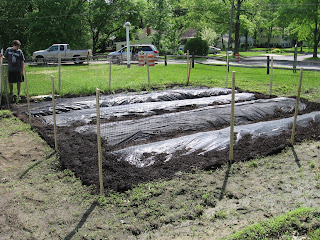 This is the farm house. 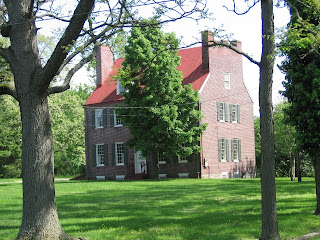 As for making a Dim Sum Sunday entry, I had to buy stuff from the local Produce Junction. And I had to go simple because of the soccer/baseball Sunday schedule. I love Cucumber Salad and can remember a couple of variations that my mom use to make. I decided to go with my mom's basic recipe but with the addition of some fresh dill.
Here are the pre-sliced ingredients. Cucumber, onion, parsley and dill. 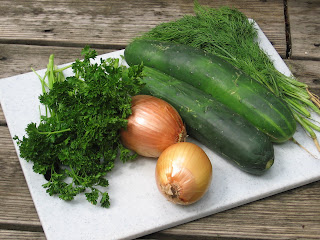 To the cucumbers, onions dill and parley, I added white vinegar, kosher salt, black pepper, sugar and garlic powder. Mix it all up. adjust the spices and put in the fridge during the soccer/baseball games. 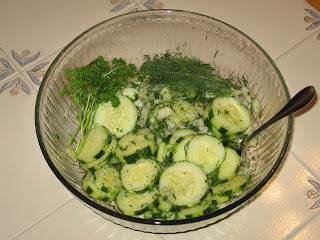 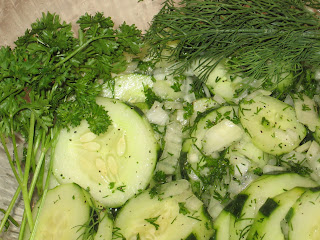 The Mrs. actually barbecued while we were at the games. She did up some new potatoes (that I pre-prepared with olive oil, salt, pepper, dill and crushed garlic in a Ziploc) and some store bought chicken shish kabobs. It all actually came out pretty good.

The Mrs. tells me we are growing cucumbers so I may revisit the cucumber salad with another of my mom's recipes (sour cream this time) assuming the deer and our schedule don't get them first.
Posted by Buzz Kill at 10:00 AM

Don't worry, I'm sure there will be a few more Garden versions of Dim Sum Sunday to come.
You've hit upon one of the few ways I enjoy cucumber and that's tarting them up in a salad. Like you, my mom had a couple of different versions but the one I seem to remember the most was the sour cream one. I loved yanking the green onions out of the ground so she could cut them up and toss them in. This one looks pretty good and sometimes simple is the best way although I did enjoy the decorative cut you put on your cucumbers.

I like that we're getting to see your garden from Day One. Here's hoping for good weather and strong backs for the rest of the growning season.

OK I love that you built a deck around a tree instead of cutting the tree down.

I would definitely like to do the sour cream cucumber salad. I will probably be using store-bought cucumbers though.

The deck-around-the-tree seemed like a good idea 15 years ago when I built it. But I've already widened the opening twice and it looks like it will need it again. After I scrub and seal the deck in the next couple of weeks it will be time to get the Sawzall out and do it again. *groan*

C'mon now, that tree gives a lot of shade. Besides you love using the Sawzall. What's that manly troika? Exploding, burning or cutting things up make men happy. There was also crashing into things but the insurance got too high so that sport is not nearly as popular as it used to be.

We're taking a stab at producing some homegrown tomatoes this season, ourselves.

This sounds like a good way to use up my lemon cucumbers without doing something fussy and time consuming.

I love the tree but Sawzalling thru the deck and frame with a 12" blade takes hours. My hands are all tingley when I'm done.

The whole garden thing is the wife's idea and a damn lot of work and cost. If it keeps her out of trouble (and my hair) I guess its worth it. But I'm not too optomistic about getting this big pile of fresh vegatables.

It's a very simple recipe and actually gets better if it refrigerates for a couple of days. Go easy on the dill (maybe 2 tablespoons) becuase fresh dill is pretty strong.

I have fruit trees and grow some herbs. Didn't think that qualified as a garden.