This month's Throwdown Challenge is being sponsored by La Diva Cucina and the theme is SALT. Moi over at Bite the Apple has graciously volunteered (again) to do the judging. Even if you don't enter or visit all of the entries, her final judgement is a great read.

For this throwdown I thought I would brine my Thanksgiving Turkey. Then I thought that brining a turkey is only one step in the whole turkey cooking process and really doesn't showcase salt. And the fact that I got sick and didn't do the turkey (the Mrs did) pretty much nixed that whole idea. But I still liked the brining idea. So what to do.

Flash back about 2 months ago for background as to how I arrived at my entry. The pudge and I love pickles. The boy not so much and Kosher Dills are the best. We eat them on hamburgers or just as a side when we have something on the barbecue. The Mrs, on the other hand, hates pickles and knows nothing about them. So when we ran out and pickles ended up on the shopping list, she bought some kind of bread and butter pickle. The pudge and I weren't too crazy about them but we have a full jar to work through.

Present day. I got the idea to make my own pickles being that the Mrs doesn't let me food shop much because I "buy too much junk food". For her information, pie is not junk food - but I digress. Anyway, I found a recipe for Ukrainian Dill and Garlic Pickles over at Allrecipe.com.

I went to Produce Junction but they didn't have pickling cucumbers. They did however, have Chinese Cucumbers that looked good to me. I only bought 2 pounds because I didn't want to make too many in case it didn't turn out. 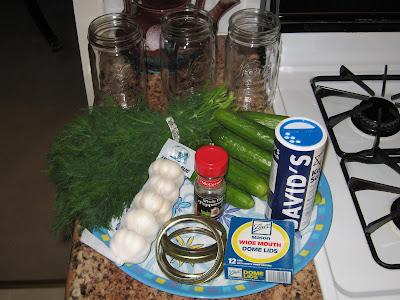 Here are all of the ingredients, I omitted the red chile pepper because the pudge doesn't like spicy. 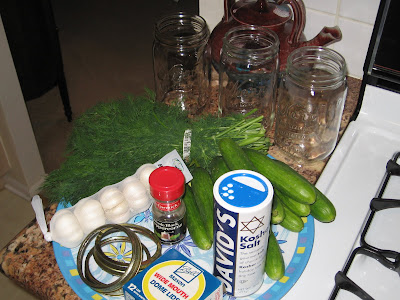 This is an easy recipe and the toughest part was cleaning all of the garlic. 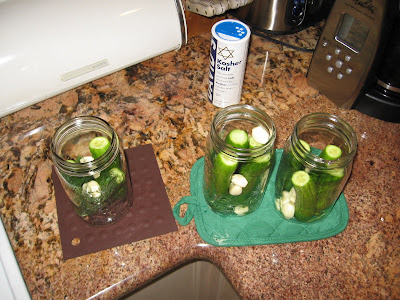 I got out the old mason jars and decide to do 2 cans and one extra for the refrigerator. The recipe calls for 4 to 10 days of brining before they're ready. 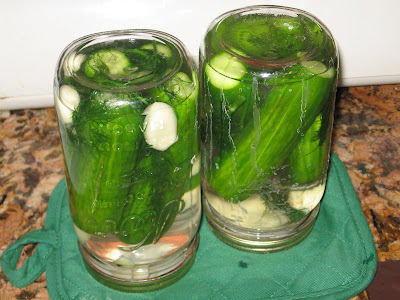 If nothing else, they look good. I really like the green and white (garlic). 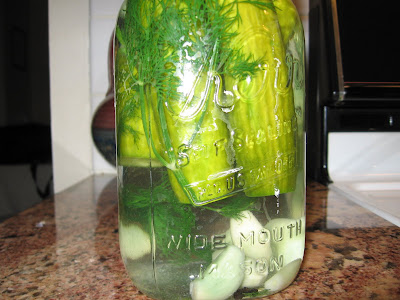 I did them the morning of the 5th of December. So by the 9th of December they should be good to try. I opened the refrigerator jar and the brine smells great. Smells like Kosher dills to me.

Update: The pudge and I tried a pickle with dinner Monday night (December 7th) and they were great. The intensity of the pickle flavor is almost there. They taste almost as good as the pickles you get from a Jewish Deli. A couple of more days and they'll be there. I'm curious as to how the canned pickles will be a couple of months from now. I'm also curious to see how they'll taste with pickling cucumbers instead of the Chinese Cucumbers. And I may try slicing the cucumbers so that more will fit in the jar.

This is a keeper. The pudge and I won't have to rely on the Mrs' pickle judgement (or lack there of) anymore.

Excellent entry! I wanted to try salt-curing something myself, but chickened out because I was afraid of the ingredients.

Congrats on your do-it-yourself ingenuity!

Funny, a couple weekends ago I had lunch with a friend who bemoaned the woeful practice of restaurants everywhere using such sad looking and tasting pickles as garnish. "Why?" she asked, "when it's so easy to make delicious pickles from scratch?" Like these. THESE look amazing!

My husband is also not allowed to shop because he thinks that 2-lbs of peppermint bark from Costco is perfectly fine for dinner.

Clever! My Dad made pickles a few years ago and swore there is nothing better than a "real pickle." And I agree, they really do look great in those jars. The green is amazing.

Hi Buzz, what a clever post, as per usual! I LOVE home made pickles and used to get them from my Polish neighbors when I lived in Chicago! I'll be making some this year when I get my pickle cucumbers in my CSA.

I do like the bread and butter pickles and put them on Cubano sandwiches which is really a panini with mustard, pickles, roast pork and ham. You really need the pickle crunch sometimes for a sandwich, esp. the grilled ones.

have you ever tried kim chee? Korean pickled vegetables usually with cabbage and chile.

See, SALT wasn't so hard, just took a bit of imagination! And hey, do you get FREE salt from the misses? Have her bring you home a box of the kosher salt and make yourself a salt encased fish!

Great job Buzz thanks so much for playing!

Those look really good. The recipe sounds simple also which is always a plus. My husband's grandmother used to make pickles and it took 3 solid days of cooking, washing and more cooking before they were ready to go in the jar. Yours looks like a much more doable project. I've never had a Chinese cuke before - are they about the same as regular?

Troll/Moi
This was really no big deal. The only cooking was boiling water to desolve the salt. I never realized it was this easy.

Allison
I really don't but that much junk. I do buy all the stuff I want to use during the week when i'm cooking dinner for everyone. As a result, I run out of everything.

Boxer
The garlic is starting to get a blue tint to it. But the pickles still look good.

Diva
I have had kim chee at a local Korean Restaurant and liked it alot. Very spicy. The Mrs does not get free salt. Shes tried though.

SCM
I don't know what your husband's grandmother was doing for 3 days. It took me about 45 minutes. The Chinese Cucumbers are small like pickling cucumbers but I would need them side by side to say what the differences are. I'll try them next time with this recipe and see what happens.

My daughter has recently taken up pickling watermelon rind, The process is very similar to yours. It tastes pretty good too.

uncle will hep ya eat 'em up!

Very clever, and I could probably actually do this. It has to be simple for me. They sound delish.

Howdy Buzz. Drop on by for the Culinary Throw Down Recap and Winner Announcement!