This month's Culinary Throwdown Challenge is being sponsored by Kym over at Kymical Reactions and the theme is PEPPERONI. Kym will also do the judging, giving Moi over at Bite the Apple a well deserved rest and chance to really compete in the throwdown rather than making a dish (and hers are always serious plates of food) that will not be judged.

Pepperoni, well the obvious choices are pizza, stromboli or sandwiches. All of which seem BORING (my apologies in advance to those of you who made pizza, stromboli or sandwiches) . But then, in the nether regions of my oft abused brain, I recalled a movie that featured a pepperoni recipe. A quick spin on IMDB.com jogged that memory to the present. The 1980 movie Seems Like Old Times staring Goldie Hawn, Chevy Chase and Charles Grodin featured a minor subplot surrounding their Spanish speaking maid, Aurora (yeah, I know) and her locally famous Chicken Pepperoni. I remember seeing this movie several times on HBO back in the late 80s and thinking WTF when ever they mentioned this dish. So I looked up the recipe and found 3 significantly different versions (without really trying). I naturally took the easiest one. How authentic is this? It's a frigging movie so it's good enough for me. And I know I'm risking blogger jinx on this with Pam and probably Moi (but probably not Karl) but what the hell.

Before we get started and for extra bonus points, here's where the magic happens. 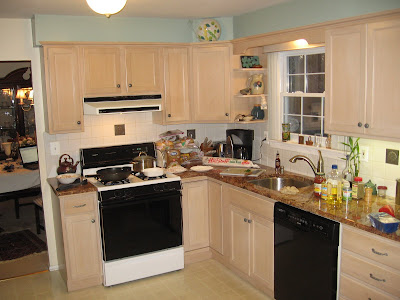 Here's what I used. 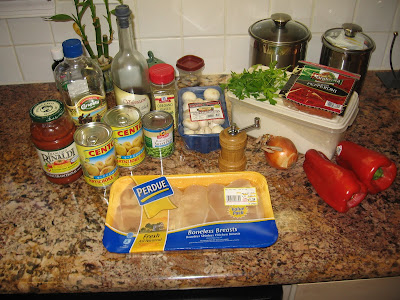 Here are some mid cooking shots. Putting this together was pretty easy but I had to get a second frying pan going because I started running out of time. The chicken pieces took longer to fry up than I thought. The Pudge snuck an action shot of me that I decided to leave in (scary, huh). 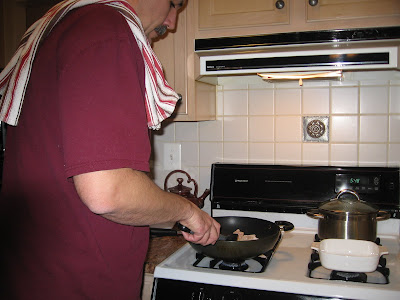 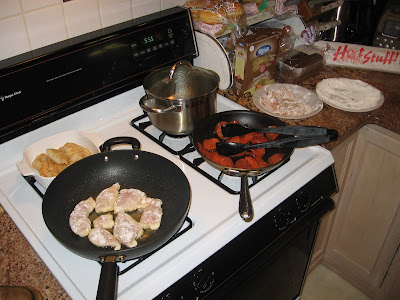 Now I recall from the movie (which I haven't seen in many years) that Aurora served this in a casserole dish. The recipe didn't call for it but i decided to put it in a casserole dish and finish it in the oven. Also, the one cup of sauce didn't seem enough and I added about two more. I laid the chicken in the bottom and put the pepperoni sauce on top. I put it on low broil for 10 minutes while the Orecchiette pasta cooked. And here's the finished dish. 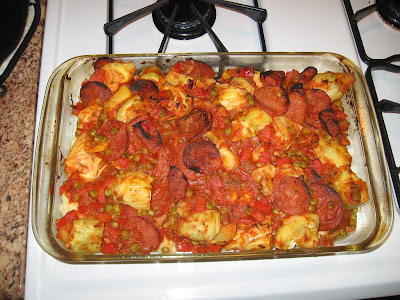 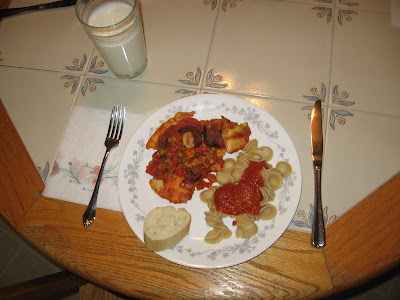 And the consensus was that it was good, but a little dry. It needed even more sauce but the spicy pepperoni flavor really tasted good. The Mrs and the Pudge could do without the artichokes, but I think they pulled the dish together. The peas really didn't do anything for the dish. So there you have it, Aurora's Chicken Pepperoni that Judge John Channing and the Governor (The Governor? OUR Governor? - I didn't ask him. He *looked* like our governor.) raved about. I didn't think it was all that, but I liked it.

As an aside, Sunday morning I used some of the leftover pepperoni with some sauce and mozzarella and made a really tasty omelet. I'm going to do that again.
Posted by Buzz Kill at 12:00 AM

Dude is that you? That's great and I love your kitchen shot (nice granite) and I think your recipe actually sounds good.

Looks very good. I like that the pepperoni got crispy as that would make it more edible to me and adds some texture.

Hi Buzzy, great to see you. No blogjinx from me; I was banned from the kitchen years ago. The Kymster doesn't get her cooking skills from me. But there is a pepperoni chicken dish at a local Italian chain that I just adore (Zio's) and it is a total fave. But let me vote in favor of the artichokes on your dish.

Buzz! Nice to see ya! Recipe actually looks really good and if I were judging this time around, I'd give you extra points for putting children to good use in the kitchen, too. I'm diggin' the color of your cabinets and I think we have the same dishwasher.

It looks very good,I'm surprised it was dry. I wonder if a little more oil during sauteing of the pepperoni would have helped.

Boxer
Yeah, that's me (Look away. I'm hideous!). The Mrs picked the granite. Took her 6 months of dragging me to the yards of 3 different stores to look at hundreds of slabs. I don't recommend granite if your a guy.

Troll
Yeah, I pan fried it and then it really crisped up under the broiler. I liked that.

Heff
When you win we'll see what your challenge theme will be. Make it everything except chicken and I'm there.

Pam
I liked the artichokes in this dish (I'm eating leftovers as I type). I don't get them that often and it was a nice treat.

Moi
You're not getting the full-on disaster that is me. Be thankful. The Pudge was only sneaking pictures, nothing else. I can't even get the kids to set the table most of the time. The Mrs picked the cabinets and a formica countertop, and I installed it. The Granite came years later but seems to match well - I guess. For the amount of time she spent searching, I think we could have picked any of those hundred designs and it would have looked fine. The dishwasher would be me and I don't know where you live.

Karl
The chicken and the pepperoni were fine. It really needed more liquid so the chicken would braise in the oven. It was paste-like, that's all. I only turn yellow when the Mrs cooks..

you throw a kitchen towel over your shoulder with panache! just like a real live chef. recipe looked pretty good - you did a great job photographing it. the leftover egg dish sounded a little better to me. enjoyed seeing your kitchen -looks great! and you. good luck today!

You all have such magnificent kitchens! Serious cooks/chefs! Love the recipe, I only just discovered artichokes and I think they're fab... but peppers dont agree with me. Other than that, I think I could adapt this and really enjoy it. Nice work!

kitchen definitely enhanced by the chef on deck--heh.

Nice recipe--sounds good enough ter try, an artichokes enhance near bout ever'thang but a chocolate milkshake..but I think the omelet sounds even better.

Chickory/Aunty
I throw a kitchen towel over my shoulder because I'm a mess when I cook. Especially with all the burners going.The omelette I made was awesome. I still have some pepperoni left for this weekend.

Joanna
They were artichoke hearts and they were really good. I don't know if I would want to get fresh artichokes because I hear they're tough to clean. The kitchen is about 15 years old. I just fixed the stove control panel last week. Cost me $170 and that was from a buddy who owns a parts store. Kitchens take a beating.

Aunty
Nice to see you up and around. I'll have to think of some more ways to work in artichokes.

Buzz! This pepperoni dish is right up my alley, right down to the artichokes. (which I recently discovered I like. Now if someone could please pick my mother up off the ground, that'd be great!)

gorgeous kitchen, LOVE your cabinets. It looks so inviting!

Buzz,
You always do such a great jobb with these throwdowns!
You must be akin to Blowfish who rolls with the main dish, leftover one and leftover 2 concept. He loves for instance a pork roast on Saturday, fresh pork sandwiches or omlette on Sunday and the remains transformed into some fab soup for the freezer. The man likes to have a relationship with his food.

HOWL! to your comments about Mrs. Buzz long search for granite. When I go to the slabyards with clients the women fussy fuss about every bit of character of every slab, the men shrug and say " just pick one". Nice job on building that Kitchen Buzz, I thought you did a nice job with the deck and gazebo from the snow pictures too.

Kym
Your pepperoni challenge really seemed to strech everybody's creativity. I borrowed my creativity from a movie and was actually surprised no one else went this route. I really thought Pam would. Anyway, thanks for hosting and let us never speak of pepperoni again.

Fishy
I do all my cooking with leftovers in mind. Not as creative as Blowfish in that I'm mostly thinking of lunch for the week ahead - for me.

I didn't want any part of this granite counter top thing because the formica one we had was fine and in great shape. The Mrs (trying to keep up with her friends) insisted on dragging my ass around and I was the one to carry all of the sample chunks (and there must have been 2 dozen) home to spread out in the kitchen. Then I told her I wanted no part of the installation. Fine, the company she chose did it all. Flash forward about 4 years later and the weight of the granite settling opened up the caulk joint between the granite and the backsplash. Not covered by warranty, I spent a Saturday afternoon (about 2 months ago) scraping the old caulk with a knife and razor, cleaning it with mineral spirits and recaulking. It came out great (you can see it in the ingredients picture above) and I was pretty proud of my work, but so much for my non-involvement. I pushed a lot of caulk into the joint, so hopefully I'll never have to do that again.

buzzie? I finally picked a winner. stop by when you can. :)

Crikey do you guys keep clean kitchens! I try...but somehow something seems to get burned on the stove and husband nukes spaghetti and baked beans in the microwave sans cover...you get the idea. sigh....

Buzz, your memory amazes me! I don't even remember that movie let alone that recipe. I think it looks goooooood! I like peas with tomatoes in Italian sauce, works well. I think you could serve this over rice or polenta too. And I'm jealous you have a gas stove.

La Diva highly approves of the "action shot" and thinks you are too hard on yo' bad self. Nice to be back "home!"

Diva
The kitchen is not that clean - really. Although I do sort of clean as I go. Mostly because I need the sink and counter space.

I watch a lot of movies and I scare myself at the stuff I remember. Polenta was actually my first choice but I couldn't find it at the store and I was in too much of a rush to ask.

Fortunately the Pudge is as bad a photgrapher as the old man.