The Karmic Kitchen threw another Dim Sum Sunday curve ball with the latest (and seasonal) challenge of using Peeps in some sort of Sunday meal type dish. Peeps are all about Easter. Unless you were raised in the Buzz Kill household 40 years ago. Then, Peeps that had hung around from Easter were roasted (set on fire) over the barbecue in July. We didn't actually eat them, we were just sick, twisted kids.

So with that mentality in mind, I set out to develop a simple melding of cupcakes and Peeps. I got the idea as soon as the theme was announced but, like always, schedule got in the way until Tuesday night. Dani over at Gardening Under the Florida Sun did a dessert similar to my idea and did it well. Just not "different" enough.

I started out with these basic ingredients (yeah, I know it's a box mix). 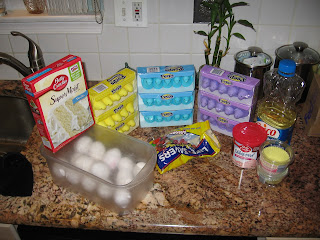 Mixed the cake batter up and poured it into cupcake...cups. 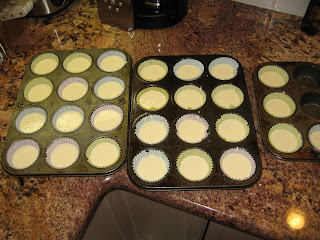 Then I put those Peeps in the batter up to their little necks. The theory here being that the batter would rise up and engulf the Peeps as they baked. Then you would break the cupcake in half and see the "surprise" in side. It looked good on paper even though I didn't actually put it on paper. 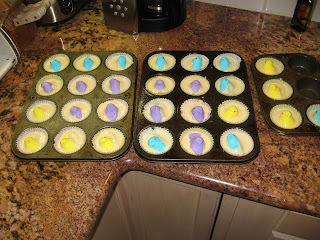 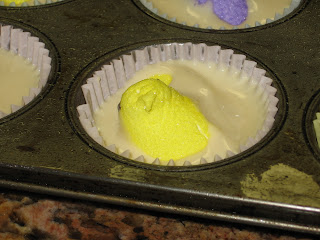 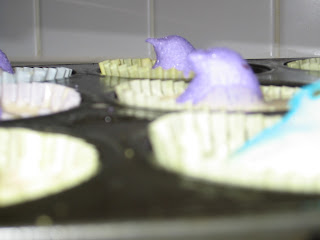 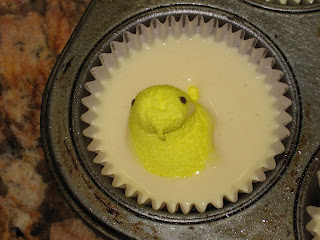 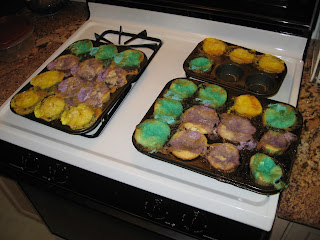 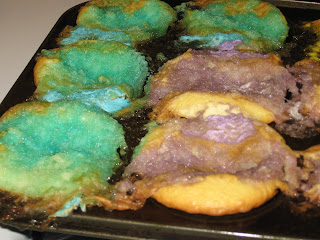 THEY DIDN'T SINK. They were pushed up with the baking batter and melted all over the place. I knew I was in trouble about 12 minutes in when I was smelling burnt Peeps instead of cupcake. So I salvaged what cupcakes I could (the monsters will eat anything) and soaked the pans in hot water to get rid of the mess. They actually tasted like cotton candy covered cupcakes. Needless to say I didn't need the icing or jelly beans. The plan (I never actually put on paper) called for them to be finished in that way.

So, as I was about to commit hari kari because of the shame I brought to the Kill family name, I was reminded of the words of Homer Simpson - “You tried your best and failed miserably. The lesson is: never try.” Happy Easter everyone.
Posted by Buzz Kill at 1:58 PM

Baking Gone Wrong! Don't feel bad. I have stories. STORIES I tell you. But you're right. Even if it looks like ca-ca, if it's sugar? You're prolly alright. Happy Easter!

That is CLASSIC. Peeps were definitely harmed and yet consumption was had and a Homer Simpson quote to boot. Excellent.

Remember you can always buy more pans and contribute to the economy.

YOU MONSTER ! You KILLED innocent Peeps !

OMG, Buzz, this is SOOOO FREAKIN' FUNNY! Why? Cuz I could see disaster from the 3rd photo (Remember, I'm doin' my own peep experiments too!) haha!

You and your siblings sound like me and my siblings when we were kids, too much curiosity and time on our hands and not enough adult supervision! (and I wouldn't have it any other way!)

Valiant effort, Buzz. So do you think it would have been more fun (or less work) to just blow them up in the microwave? Then you could contribute even more to the economy by buying a new appliance :)

dude, i was scrolling along looking at your project, neat as a pin, and then..the disaster. i was laughing my ass off. what a great post...you totally set it up perfectly. i didnt see it coming. that one last peep sitting forlornly in the batter waiting for the oven has such a great look to him...its my favorite post youve done for DSS.

funny as hell. enjoyed it.

I agree with chickory ! excellent post, fantastic photos and the quote from Homer - a perfect close.
Regards from the freshly thawed North of 60

Moi
The monsters have wiped them out already. Disasters involving sugar (that doesn't burn) will always get eaten in the Kill house.

Heff
I didn't kill them, I ....transformed them.

Dani
Peeps deserve what they get. They stare at you with those lifeless eyes. Black eyes. Like a doll's eyes. ... ah then you hear that terrible high-pitched screamin'. The kitchen turns red, and despite all the poundin' and the hollerin', they all come in and they... rip you to pieces. I almost lost a finger.

Diva
Why didn't you warn me? I thought you had my back.

Eggplant
What makes you think that wasn't plan A?

Chickory
Until you said the thing about the oven, I didn't realize I had a whole "concentration camp" sub-theme going on here. My appologies to those of you of the Jewish persuasion.

Susan
Nothing will warm you up more than a molten Peep fresh out of the crematorium, I mean oven.

Oh this is funny!!!! Just chemistry gone wrong, that's all. You had to try it! I love love LOVE this photo essay of the burning peeps. Peep-apocalypse.

bwahahahahahahahha. I love that you went ahead and continued photographing and finished. This is why I don't cook, btw. I love the shot with them sitting in the batter and at that point I thought, "maybe it will work"

Happy Easter to you and your family!

Howling funny Buzz ... I hope your wife appreciates you. And I hope she is not the resident pot scrubber in your household. Great post, I am still laughing.
Blessings on you and family this Easter.

Oh my god! That is the funniest damn thing I have ever seen! ROFL

I was TOTALLY with you, too, thinking dude had a freaky cool idea and I should try this with The Sweeties. ROFL The The Big Meltdown. Bwahahaha

Frankly, I think you committed an act of public service. I stand with ole' Chickory, firm in the belief that Peeps are evil. You can't be Ripley, 'cause you're a boy and all, but dammit I'll designate you as her sidekick. Yes!

Diva
I guess I could have melted them in the shower. (I'm kidding)

Pam/Boxer
The scientist in me will carry out an experiment to completion. Even if the end results are a sticky mess. I'm thinking now that had I put the Peeps in first and filled the cups almost to the top - maybe. Relax, I'm not going to try it. I'll think on it for a few months and probably try it for Halloween.

Fishy
You would think, based on all of her friend's husbands. I'm the only one who cooks. But my wife hates that I do this blog. Because it's out of her control. Which, by the way, is one of the main reasons I do it.

MS
I've never seen a Peep explode out of someone's chest so I wouldn't call them alien or evil. They're like guns, in the wrong hands...

Foiled by Archimedes principle. You should have added ballast. Yet, They were as colorful as your right up.

Funny thang is, todfay was a good day fer a laugh. Thanky!