Well. I finally made my work deadline and dealt with all of the other scheduling problems over the last few weeks so now I can finally start catching up on my blogging.  Although this weekend (14 - 16 October) we'll be doing the 3 1/2 hour drive to The Boy's College for Family Weekend, so I'll be out of pocket for a few days.  Next week things should be back to "normal".

You know, after The Boy left for college I thought life and schedule would get easier.  I was wrong.  Turns out The Pudge and his schedule is really taking up a lot of my time.  And the Mrs' job has her working a lot of late nights, so I'm sort of a single parent.  Now that I've taken my work deadline out of the equation (I was working a lot of 12 hour days and weekends), things are getting better.

A few good things that happened during this time were the Mrs and my anniversary, my brother's 50th birthday party, Beer Festival on the USS New Jersey and a really good haunted prison.  I fit all of these things into a schedule that includes CCD classes (Catholic Sunday school), guitar lessons, boy scouts and soccer.  And I started going to the gym twice a week (I didn't realize how much I missed that).  I'm really tired.

Anyway, I'll start off with the anniversary dinner and talk about the other things in subsequent posts.  Those of you who watched Top Chef Season 7 may remember that the winning chef, Kevin Sbraga, was a chef at a restaurant called Rats in Hamilton, NJ (just north of Trenton).  I had never heard of the restaurant or the surrounding park - Grounds for Sculpture.  And I've lived in NJ all my life!

I did some research and made some reservations (2 months in advance for a Sunday dinner).  It was an easy 45 minute drive.  It was an overcast day and we weren't really sure what to expect.  We had a 6:45PM reservation and we arrived at about 4:00PM.  We checked in the restaurant with the hostess and she said that because we had dinner reservations, admission to the grounds was 1/2 price - nice.  She also said 2 hours was enough time to tour the grounds and we were welcome to buy a drink and take it with us - nice again.  So while the Mrs waited at the entrance to the grounds, I purchased our tickets and got us each a glass of Bordeaux Blend Chateau La Grange Clinet 2006 - and it was excellent.  I didn't tell her I was getting us drinks and she was pleasantly surprised.

Here's what we saw:


This was part of the courtyard entrance to the restaurant. That's a sculpture. 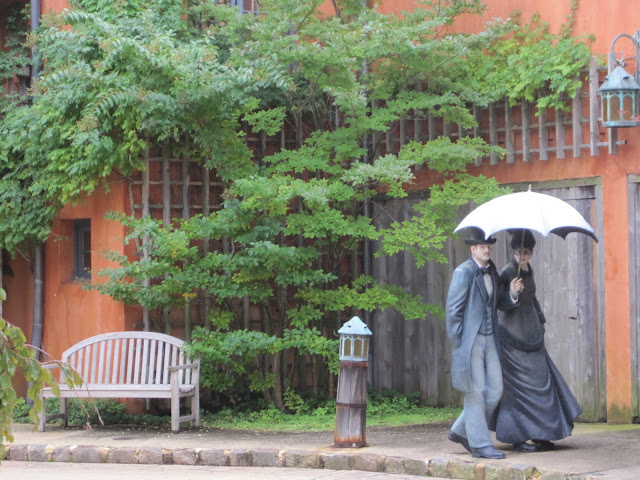 Here is what we saw at the entrance to the pathways on the grounds. This was cool. 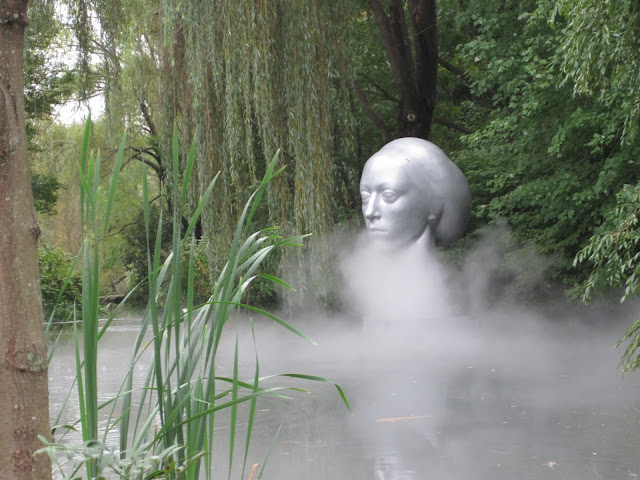 The gardens and sculptures (some 240 works) were beautiful. They ranged from the classical sculptures... 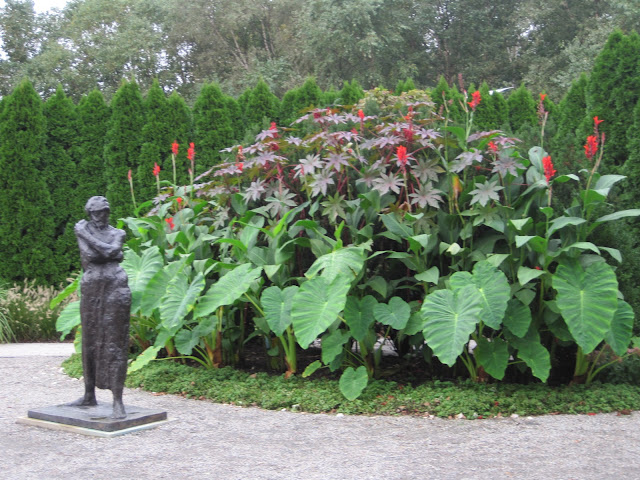 To the weird.  I looked at this one for a couple of minutes.  I couldn't look away. 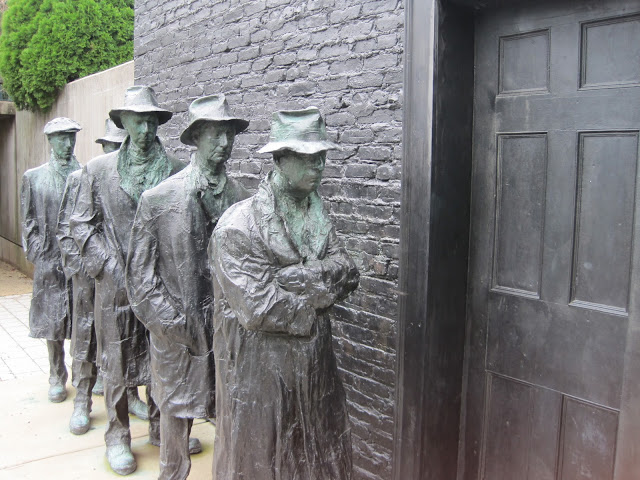 Here's me with a pile of scrap metal.  I didn't say I liked them all. 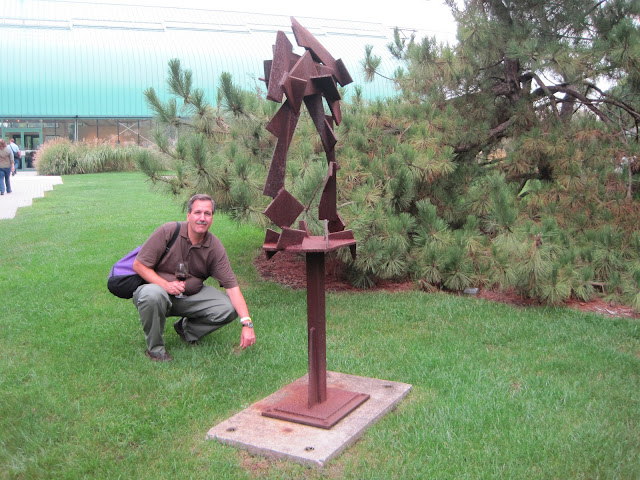 This is the back end of the restaurant. 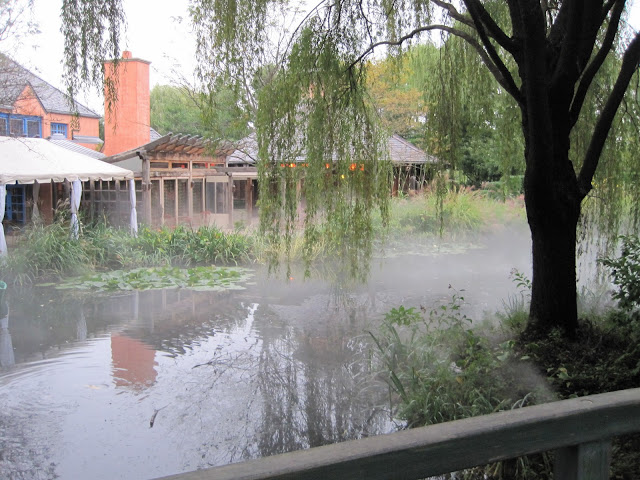 The Mrs took over a hundred pictures (that's why she's not in many and they look so good).  I just wanted to give you a taste of the grounds.

Dinner was good but not as good as I had expected.  The restaurant itself looks like the interior of a rustic, French peasant house with eclectic artwork everywhere.  We were seated in a 2nd story loft area where we could look down on the lower dining room and had a view of the foggy pond at the rear (see picture above).  We started with appetizers of Traditional Onion Soup off the menu for the Mrs and an Heirloom Tomato Terrine (special) for me. Both were good. They also had a choice of several breads. I had an herb bread that was excellent and I don't recall what the Mrs had, but she liked it. My entree was a Halibut brandade cannelloni, local spinach, saffron - vanilla shellfish broth, Maya shrimp complement (menu), which was very good. The Mrs had the Magret duck breast miso grilled local eggplant, duck confit summer roll, plum sauce (menu). It was way too rare for her (or my) taste and the plum sauce was meh.   For dessert, we split a very decadent bread pudding (special) that we both enjoyed a lot.  Total bill with 2 drinks each and tip was about $130 - not too bad.

Overall this was a great experience.  The Mrs really enjoyed it (I scored major points - I think) and she wants to definitely go again.  Maybe in the Spring.  The dinner itself was good but not what I would consider Top Chef caliber, but the service was exceptional. In all fairness to Kevin Sbraga, he left the restaurant about a year ago and there is a new chef running it.  Chef Sbraga is suppose to be opening a new restaurant in center city Philadelphia sometime this fall, so I hope to check that out.

First, welcome back! Second, yay to returning to the gym. I've been AWOL all summer and just went back and thought the same thing .... I missed it. Third great review and beautiful venue. Always nice when you toss in a photo of you.

Have a great weekend.

Welcome back, Buzz! These sculpture gardens look fascinating, and glad you had at least a pretty good dinner. Good on the points-scoring at least!!

Good to see you're well and still gainfully employed. Interesting place, how was the bar?

Nice to see you back, you've been missed.

You needed Chickory along to explain that piece of scrap metal :o)

Sounds like a wonderful place and evening and I'm surprised at how reasonably-priced your dinner was. Nothing worse than so-so food AND a high bill. I think halibut is about my favorite fish but getting someone in these parts to snag it not only fresh (or freshly frozen) and also cooking it well is near impossible.

Pam
It was way better than I thought it'd be. And thanks.

Heff
You'd probably like this place, but it's an expensive place to drink.

Boxer
I enjoy the solitude of the gym even though there may be a hundred people there. I'm in my own little zone. I did get The Pudge a membership, but he keeps making excuses not to come up with me. I've been real good about going Wednesday night and Sunday afternoon.

IE
I'm sure we anly saw part of it. Nothings symetrical and sculptures seem randomly placed. Some in little hide-away places that are very easy to miss. I'd like to go back.

Karl
Employed for the time being. The bar was a snobby type bar attached to a nice restaurant. I tried a blond ale with dinner that was quite good, but not a place you'd go for the booze.

Aunty
I missed everyone. I thought I would have time to at least comment, but didn't. You should start to see me a little more.

Moi
For me art is something you like or don't like for no good reaon. I liked most of what I saw. It was reasonably priced although I had suggested the chef's tasting menu to the Mrs at $85 each. She nixed that, but I really wanted to try it.

I like just about any kind of fish and will generally order it when we go out because nobidy els in the house likes fish (although The Pudge is coming around). The brandade cannelloni that came with the halibut was very good, but I really don't know what was in it.

Happy Anniversary! And by the way, smooth move on getting the Missus a nice glass of red for her sculpture tour, well done! heheh...

The photos came out great! I love the water shot, is that mist? Also, may I say kudos for your detailed description of your meal, did you take notes? Impressive. Great post, Buzz.

Seems we've all been busy but that just means more to write about! Glad yer back, Buzzy!

Diva
Some of the sculptures have mist/fog generators. Cool effect. I forgot to mention that on our return leg from the sculptures, the sprinkler system went on. The Mrs was standing right next to a sprinkler head that (fortunately for me) sprayed away from her when it popped up. Scared her just the same. We had to time our way back to miss the sprays.

I remember a lot of the meal but also used the restaurants on-line menu to reconstruct the meal. The lighting was very low, so I wouldn't have been able to take notes anyway. The waiter brought us an extra candles so we could read.

vanilla shellfish broth! wow, sounds pretty good. I know what you mean about those scrap metal pieces. sometimes somebody gets it right. that one with you isnt that one. grrrrehahaha. i liked the floating head with the vapor off the water under it. Glad youre back - you should know, being an old man and all, that anytime you think you have free time, that void fills. Im impressed with all you do - are you playing the electric guitar?

Chicky
The food was good, just not impressive. There were several of these scrap metal sculptures that looked like they were made from leftover pieces. I didn't get any of them and they were all rusty because the majority of sculptures are outdoors. I like the more classic sculptures. Maybe I'll do a 2nd post with some more of the Mrs' pictures.

I'm not sure what you mean by electric guitar unless you're talking about the bag over my shoulder? I was carrying raincoats, water bottles and an umbrella because we weren't sure about the rain.

The Pudge is taking guitar lessons. We were talking last night about what song he wanted to do next (for the spring recital). He chose Pink Floyd's Wish You Were Here. He's also considering The Who's Behind Blue Eyes. He's a classic rock kind of kid.