The Artist I Remember

This is a quick post for Chicky (well maybe not so quick). I left several comments for her during her Process Series on her Flannery O'Connor portrait. I told her this series of posts brought back memories of and "Uncle" of mine from my childhood who was also an artist. He was a huge influence on me and my siblings and here is a condensed version of that story.

I lived across the street from him for the first 25 years of my life and my siblings and I would visit often to learn about art. He was a painter but was famous (and published) for his work in Linoleum Block prints, wood cut prints and silk screening. He and his wife were like family and we called them Aunt Pat and Uncle Henry.

Uncle Henry worked for Speedball Paints and was a product tester. I can remember seeing big plywood sheets with dozens of dabs of different color paints, dates and notes on them in his studio. We would then use those paints for our own projects after he was done with them.

This is off of Speedball's website and that's Uncle Henry in the lower Right corner. I'm guessing from the 1950s.

Uncle Henry was also an avid horticulturalist and gardener. They had a huge property (relative to the town) and he had all kinds of exotic trees, bushes and plants. He did all of the landscaping himself that included rock patios and walls, a pond, trellises and numerous statues, some of which he made himself. And he had a vegetable garden that was about 150' x 100' and grew all kinds of tomatoes, corn, potatoes, beans and lettuce. He also grew rhubarb, horseradish, raspberries and had about 20 grape vines. It was a beautiful property and we all liked to go over in the spring, summer and fall to help "work the farm". Uncle Henry use to turn the garden plot by hand every year.

We use to celebrate birthday parties at our house and theirs and a lot of the decorations were hand made by him and us. He silk screened birthday, Christmas and special event cards for us all of the time. I still have some of them kicking around somewhere. He also did lithography and made wood carved lithographic plaques of adages and prayers. They also vacationed in New Hampshire every year for a month and he would trace the bigger fish that he would catch onto scrap lumber, cut it out, paint them and hang them on the exterior of his studio and garage. He had a number of paintings (some by us) that he would polyurethane and hang on the walls too. They had no children of their own, so we were it. It was a good part of our childhood.

Uncle Henry and Aunt Pat passed away within about a year of each other. We always thought Aunt Pat would go first because she had a fair amount of medical problems. But Uncle Henry passed first from cancer. I'm not exactly sure how old he was, but I would say early 90s. He had a brother that was wounded in World War I and my sister L has a collection of letters from him to the family while he was recovering. I want to get those from L and read them again.

When Aunt Pat died, the only relatives they had (and who the estate was left to) was a cousin in upstate Pennsylvania. We had met him and his sons a couple of times over the years, but really didn't know them. The estate was worth several million dollars in 1990 dollars. You would never get that if you saw how simply they lived. depression era mentality I guess. My family tried to get the town leaders to apply for Green Acres funding to purchase the property so that it could be made into a park or town art/rec center. But you know politicians. They talk a good game but never applied for the funding. The Mrs and I considered purchasing the property, but decided it wasn't right for us

Shortly after Aunt Pat passed, my sister L went to the studio and took some of the sentimental prints and art work. So she is the keeper of most of it at her house and I need to get over there some day to see if there is some things we can hang in our house. It's a shame for it to be stored in a basement.

This is not one of Uncle Henry's woodcut prints but one I know he admired. This is a very similar style to his although he would use brighter colors. 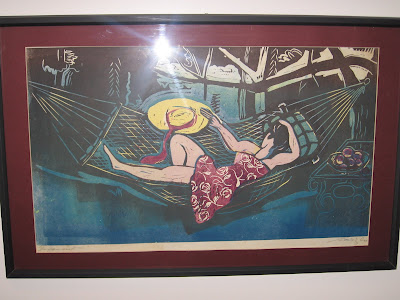 This is a painting Uncle Henry gave me when I bought my first house. This was a very typical landscape that he would do. Bright colors (I suspect partially because those seamed to be the colors he tested) with trees and houses and sometimes lakes. Sorry for the flash in the glass, I'm too lazy to take it out, 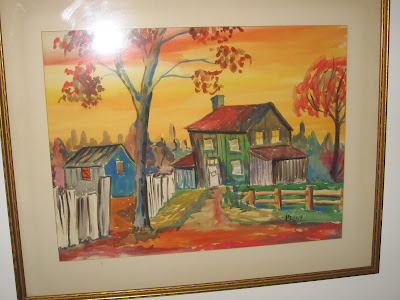 I found this wood print on line that is attributed to Uncle Henry circa 1964. I believe it is one of his because it is definitely the style I remember. 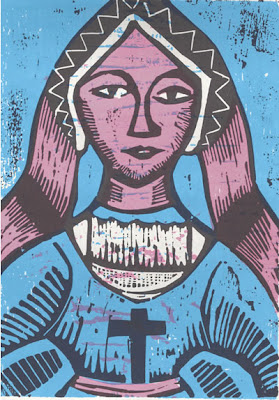 So you see Chicky, artists do influence more people then they know. And technology can make you live forever (kind of like Highlander). I don't think Uncle Henry ever saw a computer, but 20 some years after his death, his art and influence are still around. If I find anymore of his work at my sister's, maybe I'll do another post.

EDIT: I forgot that I found some on-line pics of Uncle Henry's Book. My sister L may even have copies of the book. I can remember seeing a whole box of them in his studio - many years ago. 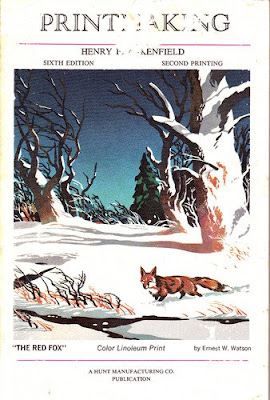 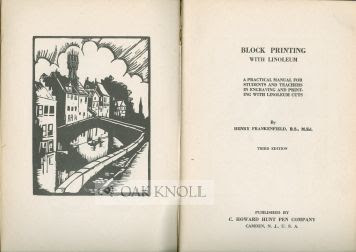 wow--this is one of mah favorite BuzzK posts. so much in this--charmin' pair, Uncle Henry an' Aunty Pat. They touched lives in ways that they only dimly knew. How profound.

I hope ya do get to read the letters that L done archived, an' also rescuce some of Uncle Henry's paintin's.

Would that we all be as fine an influence as this dear pair.

Aunty
I'm pretty sure L still has those letters. I remember there were dozens. I'd love to scan a couple and post about them. We'll see.

What a great post. My heart was breaking when I read what happened to their property/gardens. :-( I can't agree with you more that artists do influence people IF they are the kind of person that enjoy people and want to share their talents (Chickory and your "Uncle" fall into this category.) You need to get more photos of the other things he did and I love the photo of him you did find. Have a good weekend!

I am with Aunty, one of my fave Buzzy posts and thank you for sharing this with us. It's amazing how many art and music teachers I've had that made an influence in my life and I love to hear these stories. Block printing is so unusual, I love the painting too. What a crazy palette Henry used. You were lucky to have such wonderful, loving neighbors, Buzz. Great post, thanks, your memories of Henry along with his artwork are true treasures.

wonderful post. Man, a guy like that to grow up with is an incredible treasure. My favorites are the red fox and the madonna figure above it- that is very 60s looking. I used to do subtractive linoleum prints - you would print a series of one color then cut the block back, do the next color and so forth. This was a way to not have a different "plate" for each color. I love the look of lino cuts...you know Picasso did lots of them and they are uber cool. Im with Boxer...I wish you had bought that house! The idea of bulldozing an entire life poured into that garden and studio makes me sick. and can you imagine how rich that earth was? what a collossal waste of goodness. He sounds like the greatest guy. I wonder why they had no children? It will be similar for me...who will care about my beloved chickory -the studio the garden...the creatures....after me?
Thanks so much for this Buzz/ If you find more work, please do post it. xo chickry

I actually have that book!!! What a bittersweet tale. Really sad that all that was bulldozed under. I hope you unearth some of his stuff at your sister's house. It should grace your walls, not hide in a basement.

I studied print making in school (from an art historical standpoint) and when I graduated went into the (commercial) printing industry. To this day, whether commercial or fine art, printing remains a big interest of mine. How wonderful for you that you grew up right across the street from such a master of the medium. And that you and your sisters are in some way a keeper of Uncle Henry's flame.

A most fascinating post, Buzz! Wonderful that you grew up with so many inspirations from Uncle Henry. And that your memories of him were rekindled by Chicky’s recent series.

Heartbreaking indeed that his studio, garden, and acreage were so quickly built over. I’ve seen way too much of that here, as former farmland around the Cincinnati outer belt has become unrecognizably filled with big-box commercial developments and high-end subdivisions. Is Henry and Pat’s original house still there?

As far as Vegas is concerned, IMHO you’re not missing anything. The only reason I went was because it was the closest place to fly into to get to Bryce and Zion National Parks. As if Vegas isn’t already surreal, emerging from a week in those glorious natural havens to venture out for a quick evening seeing the Strip before catching my return flight made it even more absurd to me.

You in for the Bacon Smackdown? At least it cooks quickly :)

Has your weather improved? Hope you manage to enjoy your busy weekend.